Getting deep into the weeds of local congressional races isn’t my thing, but it’s certainly been intriguing this year watching Republicans attack Democrats for being willing to accept Republican positions on various issues. Until now, the most egregious example of this came from Karl Rove’s Super PAC, which has attacked several Democratic senators for supporting a plan to raise the retirement age of Social Security—an idea that Republicans have been promoting for years. Chutzpah!

But now we have a new contender in the sweepstakes for sheer partisan hypocrisy. Dylan Matthews tells us today that in Arizona a Republican contender is 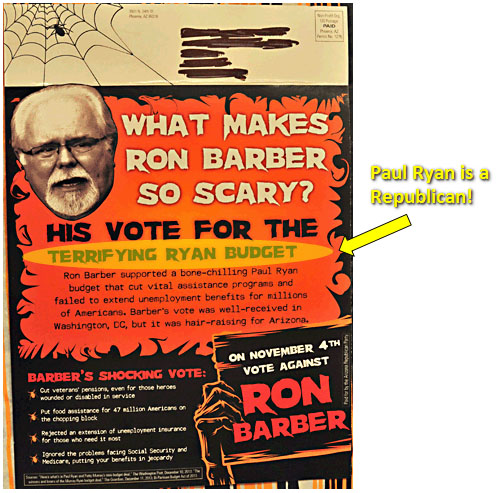 The flyer, which apparently comes from the Arizona Republican Party, is on the right. Note the Arizona GOP’s thundering denunciation of Ryan’s “bone-chilling” budget, which “cut vital assistance programs.” That’s all true, of course, and many Democrats held their noses and voted for the deal. But there’s no question that all the bone-chilling stuff came straight from the fever swamps of the Republican Party. They’re the ones who refused to extend unemployment benefits and demanded cuts in food assistance.