From Rick Perry, asked if he’s smart enough to occupy the Oval Office:

Running for the presidency’s not an IQ test.

Boy howdy, we’ve proven that quite a few times, haven’t we? In any case, I’m genuinely interested in Perry’s candidacy. Back in 2012, when he first got into the race and was being lauded as practically unbeatable, I wrote a post listing 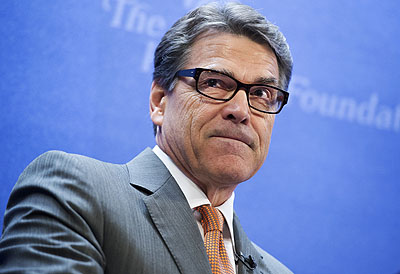 the top ten reasons that Perry was weaker than everyone thought. For reference, here’s the nickel version of the list:

Obviously #1 is no longer a factor. Perry has run before, and expectations this time around are suitably modest. And #10 doesn’t apply this year. Of the remaining eight, I’d say he’s rather noticeably working to soften #2, #3, #4, #6 (maybe), and #7. And this in turn also means he’s trying to reach out beyond his tea party base (#8). In other words, he seems to be keenly aware of the weaknesses that got my attention in 2012 and is explicitly trying to overcome them.

Does this mean he can win this time around? Not at all, and for various reasons I’d still bet against him. But despite the fact that his star has waned compared to 2012, I’d say his chances are actually better this time around. After all, he’s still a very savvy politician—and although I don’t know how high his IQ is, it’s high enough. If he’s got the self-discipline to stick to his reinvented self and not make any dumb mistakes, he could be formidable in the Republican primaries next year.