The methodology they used to calculate bias involves a series of bank shots. Here’s how it’s done. First, take a group of economists with known ideologies. Second, examine the word choices in their papers. Third, create an algorithm that links ideology and word choice. Fourth, apply the algorithm to a large group of economists. Fifth, examine the numerical results in their papers. Sixth, normalize the results within fields to see how left- or right-leaning their conclusions are. Seventh, plot numerical results vs. predicted ideology.

Whew! There are, needless to say, error bars at every step along the way. Still, you will end up with a regression line eventually, and you can see it in the chart on the right. Sure enough, it shows that liberal 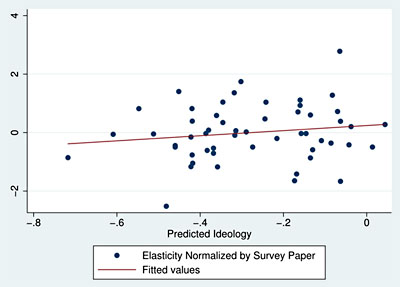 That, however, is not the conclusion I draw from all this. What I see is a nearly flat regression line with a ton of variance. Those blue dots are all over the place. If the authors say their results are statistically significant, I believe them, but it sure looks to me as if (a) the real-world error bars are pretty big here, and (b) economists as a whole are remarkably unbiased. I mean, look at that chart again. I would have expected a much steeper line. Instead, what we see is just the barest possibility that ideology has a very slight effect on economists’ findings.

If these results are actually true, then congratulations economists! You guys are pretty damn evenhanded. The most committed Austrians and the most extreme socialists are apparently producing numerical results that are only slightly different. If there’s another field this side of nuclear physics that does better, I’d be surprised.