Politically, the primary challenge facing Iraq’s new Shiite leaders is forging a government that includes significant participation from the Sunni minority and slowly regains their trust in a unified state. It’s been Job 1 from the start. That said, building a political accommodation with the 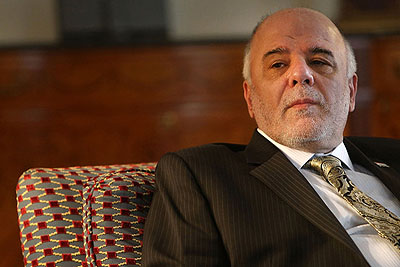 northern Kurds is a close second, and today brought some good news on that front:

In a far-reaching deal with the potential to unite Iraq in the face of a Sunni insurgency, the government of Prime Minister Haider al-Abadi agreed on Tuesday to a long-term pact with the autonomous Kurdish region over how to divide the country’s oil wealth and cooperate on fighting Islamic State extremists.

The deal unites Baghdad and Erbil, the Kurdish capital in the north, over the issue of oil revenues and budget payments, and is likely to halt a drive — at least in the short term — by the Kurds for an independent state. It includes payments from the central government for the salaries of Kurdish security forces, known as the pesh merga, and also will allow the flow of weapons to the Kurds from the United States, with the government in Baghdad as intermediary.

….The reconciliation between Baghdad and the Kurdish region also appeared to validate one element of President Obama’s strategy in confronting the Islamic State: pushing for a new, more inclusive leader of Iraq. When the extremists swept into Mosul, Iraq’s second-largest city, in June, Mr. Obama decided that Mr. Maliki had to go before the United States would ramp up its military efforts against the Islamic State.

A deal with the Kurds was always going to be easier than regaining the participation of the Sunnis. Kurdistan has long had de facto autonomy from Baghdad, and negotiating over oil wealth is a fairly straightforward bit of dealmaking. An accommodation has been possible all along whenever Baghdad was willing to compromise—and the ISIS threat gave the new government there plenty of motivation to do just that.

The same can’t be said of accommodation with the Sunnis. The Sunni-Shia divide in the Arab regions of Iraq is deeper and more fundamental, and there’s no single, well-defined Sunni region with established leadership and relatively clear demands that can be negotiated with cleanly. There are just years—or decades or centuries, depending on how you want to count—of mistrust and bad blood. Combine that with nearly a decade of rampant corruption and tribal jingoism under Nouri al-Maliki’s Shiite government and you don’t have a problem that can be solved either quickly or easily.

Still, the Kurdish deal suggests that Haider al-Abadi may be genuinely willing to do the work necessary to rein in tensions and provide the Sunni minority with the representation and influence it wants. Maybe. As always, it’s not wise to read too much into this. But it’s a good sign.