Via Atrios, here is America’s-mayor-for-life Rudy Giuliani commenting on the killing of two New York City police officers yesterday by a deranged gunman: 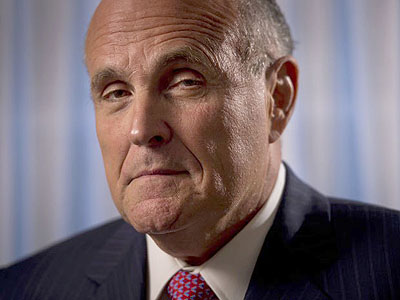 ….The former mayor also criticized President Barack Obama, Holder, and Al Sharpton for addressing the underlining racial tensions behind the failure to indict the white police officers who killed [Eric Garner on Staten Island] and Mike Brown in Ferguson. “They have created an atmosphere of severe, strong, anti-police hatred in certain communities. For that, they should be ashamed of themselves,” he said.

Fair enough. But I assume this means we can blame Bill O’Reilly for his 28 episodes of invective against “Tiller the Baby Killer” that eventually ended in the murder of Wichita abortion provider George Tiller by anti-abortion activist Scott Roeder. We can blame conservative talk radio for fueling the anti-government hysteria that led Timothy McVeigh to bomb a federal building in Oklahoma City. We can blame the relentless xenophobia of Fox News for the bombing of an Islamic Center in Joplin or the massacre of Sikh worshippers by a white supremacist in Wisconsin. We can blame the NRA for the mass shootings in Newtown and Aurora. We can blame Republicans for stoking the anti-IRS paranoia that prompted Andrew Joseph Stack to crash a private plane into an IRS building in Austin, killing two people. We can blame the Christian Right for the anti-gay paranoia that led the Westboro Baptist Church to picket the funeral of Matthew Snyder, a US Marine killed in Iraq, with signs that carried their signature “God Hates Fags” slogan. We can blame Sean Hannity for his repeated support of Cliven Bundy’s “range war” against the BLM, which eventually motivated Jerad and Amanda Miller to kill five people in Las Vegas after participating in the Bundy standoff and declaring, “If they’re going to come bring violence to us, well, if that’s the language they want to speak, we’ll learn it.” And, of course, we can blame Rudy Giuliani and the entire conservative movement for their virtually unanimous indifference to the state-sanctioned police killings of black suspects over minor offenses in Ferguson and Staten Island, which apparently motivated the murder of the New York police officers on Saturday.

Or wait. Maybe we can’t do any of those things. Maybe lots of people support lots of things, and we can’t twist that generalized support into blame for maniacs who decide to take up arms for their own demented reasons. Maybe that’s a better idea after all.