Paul Krugman writes today about the dogged conservative claim that the current recovery has been weak thanks to the job-killing effects of Obamacare and Obama regulation and the generally dire effects of Obama’s hostility to the business sector. But I think Krugman undersells his case. He shows that the current recovery has created more private sector jobs than the 2001-2007 recovery, and that’s true. But in fairness to the Bush years, the labor force was smaller back then and Bush was working from a smaller base. So of course fewer jobs were created. What you really want to look at is jobs as a percent of the total labor force. And here’s what you get: 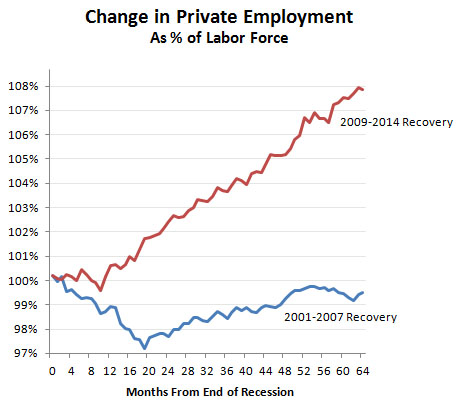 The Obama recovery isn’t just a little bit better than the Bush recovery. It’s miles better. But here’s the interesting thing. This chart looks only at private sector employment. If you want to make Bush look better, you can look at total employment instead. It’s still not a great picture, but it’s a little better: 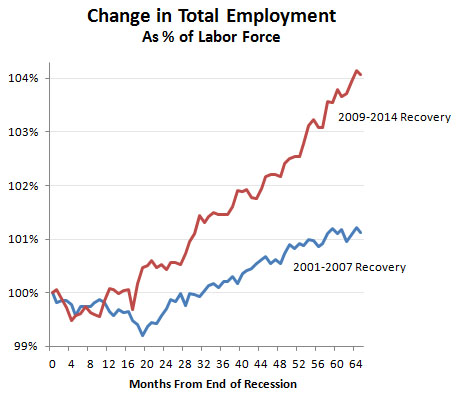 Do you see what happened? The Bush recovery looks a bit healthier and the Obama recovery looks a bit weaker. Why? Because we added government jobs. Bush got a nice tailwind from increased hiring at the state and federal level. Obama, conversely, was sailing into heavy headwinds because he inherited a worse recession. States cut employment sharply—partly because they had to and partly because Republican governors saw the recession as an opportunity to slash the size of government—and Congress was unwilling to help them out in any kind of serious way.

This is obviously not a story that conservatives are especially likely to highlight. But there’s not much question about it. Bush benefited not just from a historic housing bubble, but from big increases in government spending and government employment. But even at that his recovery was anemic. Obama had no such help. He had to fight not just a historic housing bust, but big drops in both government spending and government employment. Despite that, his recovery outperformed Bush’s by a wide margin.

There are, of course, plenty of caveats to all this. First of all, the labor force participation rate has been shrinking ever since 2000, and that’s obviously not the fault of either Bush or Obama. It’s a secular trend. Second, the absolute size of the labor force started out smaller in 2001 than in 2010, but it grew during the Bush recovery, which makes his trend line look worse. Its growth has been pretty sluggish during the Obama recovery as people have dropped out of the labor force, which makes his trend line look better. These are the kinds of things that make simple comparisons between administrations so hard. And as Krugman points out, it’s unclear just how much economic policy from either administration really affected their respective recoveries anyway:

I would argue that in some ways the depth of the preceding slump set the stage for a faster recovery. But the point is that the usual suspects have been using the alleged uniquely poor performance under Obama to claim uniquely bad policies, or bad attitude, or something. And if that’s the game they want to play, they have just scored an impressive own goal.

Roger that. If you want to credit Bush for his tax cuts and malign Obama for his stimulus program and his regulatory posture, then you have to accept the results as well. And by virtually any measure, including the fact that the current recovery hasn’t ended in an epic global crash, Obama has done considerably better than Bush.