Keith Humphreys passes along some positive news about rape:

Twenty years ago, the National Crime Victimization Survey was redesigned to do a better job detecting sexual assault….In the space of one generation, the raw number of rapes has dropped by 45% and the population-adjusted rate of rape has dropped 55%.

I started my career working with and advocating for rape victims, and no one needs to convince me that the only acceptable goal for society is to have no rapes at all. But that doesn’t change the fact that we have experienced an astonishingly positive change that should lead us to (1) 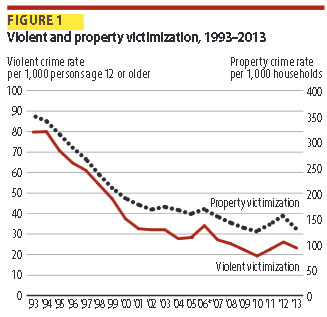 Figure out how it was achieved so that we can build on it (personally, I credit the feminist movement, but there may be other variables) and (2) Never give up hope that we can push back dramatically against even the most horrific social problems.

I have to call foul on this. The starting point for this statistic is 1992, the absolute peak of the violent crime wave in America that started during the 60s and continued rising for a generation. Since that peak, all violent crime as measured by the NCVS has declined by well over half. The decline in rape is simply part of this overall trend, not a bright spot in an otherwise grim crime picture.

In fact, it’s just the opposite: the decline in the reported rape rate has lagged the overall drop in reported violent crime. It’s plausible that the feminist movement has something to do with this, since it’s encouraged more women to report rapes and pushed the criminal justice system into taking rape more seriously. But the raw decline in rape itself? That’s almost certainly due not to feminism, but to the same factors that have been responsible for the stunning decline in all violent crime over the past two decades. My hypothesis about this is pretty well known, so I won’t repeat it here. But whatever it is, it’s something pretty broad-based.