A couple of days ago, I had in mind a follow-up post about the point that defense of free speech doesn’t necessarily demand “solidarity” with the speech itself. This is obvious. If an extremist gay rights lunatic murdered a dozen members of the Westboro Baptist Church, would we all start showily plastering “God Hates Fags” on our websites? The question answers itself. There might a few photos showing WBC members sporting the phrase because there’s some news 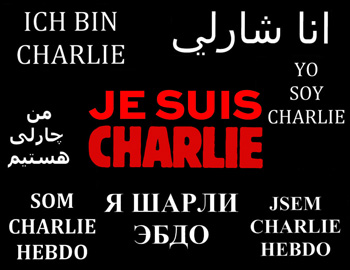 value in making it clear what sparked the attacks, but that would be it.

Anyway, I didn’t do it. The only way to make the point was to choose something deliberately and revoltingly offensive, so I backed off. But Glenn Greenwald didn’t:

This week’s defense of free speech rights was so spirited that it gave rise to a brand new principle: to defend free speech, one not only defends the right to disseminate the speech, but embraces the content of the speech itself. Numerous writers thus demanded: to show “solidarity” with the murdered cartoonists, one should not merely condemn the attacks and defend the right of the cartoonists to publish, but should publish and even celebrate those cartoons. “The best response to Charlie Hebdo attack,” announced Slate’s editor Jacob Weisberg, “is to escalate blasphemous satire.”

Some of the cartoons published by Charlie Hebdo were not just offensive but bigoted, such as the one mocking the African sex slaves of Boko Haram as welfare queens….But no matter. Their cartoons were noble and should be celebrated — not just on free speech grounds but for their content. In a column entitled “The Blasphemy We Need,” The New York Times’ Ross Douthat argued that “the right to blaspheme (and otherwise give offense) is essential to the liberal order” and “that kind of blasphemy [that provokes violence] is precisely the kind that needs to be defended, because it’s the kind that clearly serves a free society’s greater good.” New York Magazine’s Jonathan Chait actually proclaimed that “one cannot defend the right [to blaspheme] without defending the practice.”

….It is self-evident that if a writer who specialized in overtly anti-black or anti-Semitic screeds had been murdered for their ideas, there would be no widespread calls to republish their trash in “solidarity” with their free speech rights….When we originally discussed publishing this article to make these points, our intention was to commission two or three cartoonists to create cartoons that mock Judaism and malign sacred figures to Jews the way Charlie Hebdo did to Muslims. But that idea was thwarted by the fact that no mainstream western cartoonist would dare put their name on an anti-Jewish cartoon, even if done for satire purposes, because doing so would instantly and permanently destroy their career, at least. Anti-Islam and anti-Muslim commentary (and cartoons) are a dime a dozen in western media outlets.

I don’t agree with everything Greenwald says in his post. In particular, I think he really does downplay the disparity in both the number and virulence of terrorist attacks by radical Islamic groups compared to other groups. Like it or not, that makes a difference. He also would have been well-served by reprinting more than just anti-Semitic cartoons. Nonetheless, he makes his point vigorously, as usual, including a refresher of the evidence that terrorist violence is hardly limited to radical Islamists.

I am, I confess, conflicted about this. There is value in solidarity in the face of such a hideous attack. Still, although refusing to publish out of fear is plainly wrong—this is hardly a controversial point—letting a terrorist attack provoke an overreaction is a dubious response as well. For this reason, Greenwald’s piece is worth reading in full even if, in the end, you think he’s wrong. Maybe even especially if you think he’s wrong.