Los Angeles is gearing up to equip its entire police force with body cameras, but Chief Charlie Beck says he doesn’t plan to routinely release bodycam footage to the public. “I don’t think that transparency means we post every interaction on YouTube,” he said yesterday. Plus this:

The chief said he felt there was a “moral prohibition” as well.

“People invite us into their homes on their worst possible day, and I don’t think they invite us with the intention of having that interaction made public,” he said. “Families call us when they’re in crisis. Victims call us when they’ve had horrific things done to them by evil people. And to make those things public revictimizes them, doesn’t serve justice. And I don’t think it’s the right thing to do.”

This may be self-serving on Beck’s part, but the truth is that he has a point. And the ACLU agrees:

The Southern California chapter of the American Civil Liberties Union has indicated support for the cameras but is demanding strong policies to protect civilian privacy. The organization wrote to the Police Commission, recommending it make public video of high-profile incidents, such as police shootings, “if not while an investigation is pending, then as soon as it is concluded.”

I’m still struggling with the right answer to this, and I think it’s going to be a while before we figure out the right balance. In the meantime, as I continue to noodle over what rules 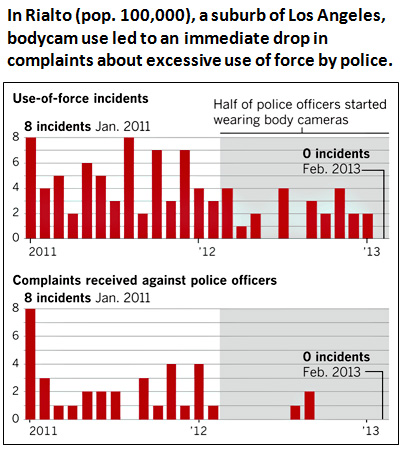 should govern release of bodycam footage, I’ll toss out a few thoughts:

The fundamental question underlying all of this, of course, is: Who decides? Not the police themselves. Maybe judges? An independent agency? But if it’s an agency, how do you prevent it from becoming captured by the police department? These are really knotty issues, and I wouldn’t be surprised if several of them end up in front of the Supreme Court over the next few years.

At yesterday’s meeting, Police Commission President Steve Soboroff said “This is not for YouTube. This is not for TMZ. This is for maintaining the city’s safety.” Maybe so. But what it’s for doesn’t matter. Once this stuff is public, it will end up on TMZ and YouTube whether anyone likes it or not.