Over the past few weeks, Republicans have become oddly troubled about the state of the American economy. It’s not just that recovery from the Great Recession has been slow. Their big concern is that income inequality is growing. Middle-class wages are stagnating. GDP growth is benefiting corporations and the rich, but no one else. The economy is becoming fundamentally unfair for the average joe.

This is certainly a sharp U-turn for a party that’s traditionally been more concerned with cutting regulations on businesses and lowering taxes on the rich. Why the sudden unease with the fact that the rich are doing so well?

The cynical side of me says the answer is simple: Republicans don’t really care about the growing unfairness of the economy any more than they ever have. They’ve just decided to attack Democrats on their strongest point, not their weakest. This was a favorite tactic of Karl Rove’s, and over the past decade or two it’s become a fairly conventional strategy. If 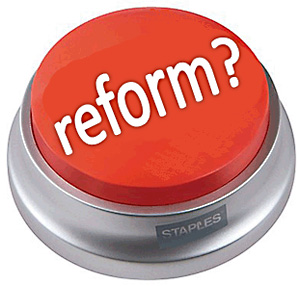 Hillary Clinton thinks she can make hay by pointing out how the well the rich are doing at the expense of everyone else—well, let’s just defuse that right from the start by agreeing with her. Thomas Edsall puts it like this:

The danger for Democrats is that they will lose ownership of the issues of stagnation, opportunity and fairness. But they also face what may be a deeper problem: What happens when their candidates are not the only ones who can harness the emotional power that stems from the anger many Americans feel as they helplessly watch the geyser of wealth shooting to the top?

The less cynical view is that the Republican Party is finally responding to the views of the “reformicons,” a loose group of youngish thinkers who have urged the GOP to adopt a more populist, family-friendly economic agenda. This, goes the story, is pushing Republicans in a more centrist direction, and is responsible for their increasing attention to issues of economic fairness. As Edsall says, they have to move to the center if they want to win in 2016. However, Yuval Levin, one of the most prominent of the reformicons, says this is just flatly wrong:

A lot of [Edsall’s] confusion would be resolved if he considered the possibility that we are actually trying to drag the party to the right, not the center—on the tax question that is his focus, and on the other issues we have taken up.

….Edsall’s treatment of the tax question as the one on which the reformers have stepped furthest from traditional conservative arguments is a good illustration of his failure to see this dynamic….The kind of proposals that “reform conservatives” tend to call for, and the sort that Lee and Marco Rubio have advanced in Congress, consist of the same basic components as most of the successful conservative tax reforms of the last three decades….[However,] it does emphasize the business tax code in pursuit of growth more….It does emphasize marginal rate reductions less….It does deliver more of its tax relief through payroll-tax cuts….It does prominently feature the over-taxation of parents among the distortions it seeks to correct.

….This approach to tax reform is precisely an application of longstanding conservative principles and goals to contemporary circumstances….So on taxes, the question between some reform conservatives and some other conservatives is how best to move Republicans to the right….At its core, at least as I see it, “reform conservatism” is just applied conservatism. In many areas of policy, we’re trying to move Republicans from merely saying no to the left, or worse yet saying “yes, but a little less,” to showing what the right would do instead.

I remain unsure what to think of this argument. In one sense, it just seems opportunistic. Reformicons have so far made little headway with a Republican Party that’s been relentlessly moving to the right, so now they’re trying to insist that their agenda is more conservative than even the tea party agenda. Honest. You just have to squint at it in the right way.

But in another sense, I buy Levin’s pitch. Most of the reformicons really are trying to shrink the size of government and lower the overall tax take. The fact that their proposals are perhaps more likely to get adopted in the real world makes them, in a practical sense, more conservative than a firebrand who just wants to scream about taxes with no real chance of ever getting a conservative tax plan passed.

That said, I still think Levin underestimates some of the differences here. The reformicons, he admits, do emphasize marginal rate reductions less than traditional conservatives. But this is not just some minor point of tactics. Ever since Reagan, lowering marginal rates on the rich has been one of the two or three unshakeable Holy Grails of the conservative movement. You see this over and over again when Republicans actively oppose tax cuts if they don’t include a rate cut at the top. They don’t want to reduce payroll taxes. They don’t want to increase child tax credits. What they want is to cut tax rates on the rich. The evidence on this point could hardly be more crystal clear.

Overall, then, I’d say Edsall has the better of this argument, and he’s right to be a bit befuddled. The reformicons may say that their agenda is both more populist and more conservative than traditional Republicanism, but that’s a hard argument to swallow. And when it comes to issues other than taxes, the problems get even worse. Reformicons mostly want to accept the welfare state but transform it into something more efficient. That’s not a message that the modern Republican Party is open to. Ditto on social issues, where reformicons tend to simply stay quiet. But in real life, politicians don’t get to stay quiet. They either toe the line on social issues or else they’re drummed out of the movement.