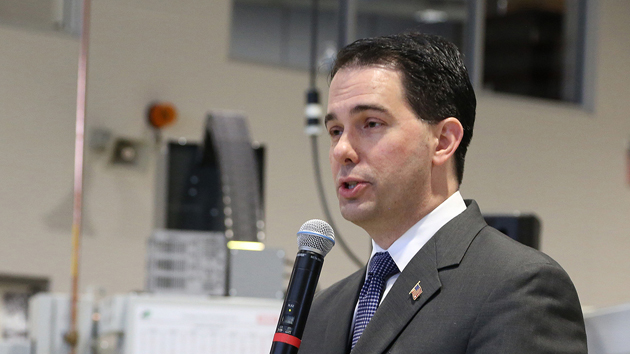 For those of us who are sort of fascinated by the rise of Scott Walker as a Republican presidential contender, here’s an interesting chart from Jason McDaniel, a political science professor at San Francisco State University. It shows the relative conservative-ness of GOP presidential nominees in the past six contested elections, and it demonstrates what an outlier Walker would be if he won next year’s primary: He’d be the first candidate since Ronald Reagan who’s more conservative 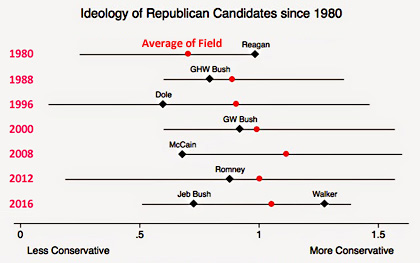 than the average of the Republican field. And by McDaniel’s measure,1 he’d actually be the most conservative recent nominee, period—even more right-wing than Reagan:

Walker is well to the right end of the conservative spectrum, residing in the ideological neighborhood of Ted Cruz and Rand Paul…It is not a stretch to argue that if nominated, Walker would be the most conservative Republican nominee since Barry Goldwater in 1964.

Of course, the fact that this chart seems surprising is one of Walker’s big strengths. He may be as conservative as, say, Ted Cruz or Rand Paul, but he doesn’t seem as conservative. He doesn’t have Cruz’s bombast and he doesn’t go around hinting that we should go back to the gold standard, like Rand Paul. In practice, that may put him closer to the center of the field than his actual positions warrant.

Still, McDaniel’s data is worth taking note of. If Walker remains hardnosed in his views, it may be hard to hide this from the voters. Eventually he’s going to say something that will cause the Jeb Bushes and Chris Christies to pounce, and that might expose him as too much of an ideologue to win the mainstream Republican vote. It all depends on how well he learns to dog whistle and tap dance at the same time. But then, that’s true of everyone running for president, isn’t it?

1Using data from Adam Bonica, as McDaniel points out via Twitter.