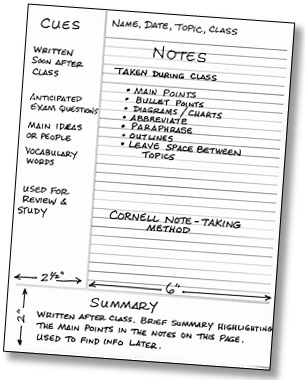 Joseph Stromberg reports on recent research suggesting that taking notes by hand is way better for students than taking notes on a laptop:

The two groups of students — laptop users and hand-writers — did pretty similarly on the factual questions. But the laptop users did significantly worse on the conceptual ones.

The researchers also noticed that the laptop users took down many more words, and were more likely to take down speech from the video verbatim….As a final test, the researchers had students watch a seven-minute lecture (taking notes either on a laptop or by hand), let a week pass, then gave some of the students ten minutes to study their notes before taking a test.

Having time to study mattered — but only for students who’d taken notes by hand. These students did significantly better on both conceptual and factual questions. But studying didn’t help laptop users at all, and even made them perform slightly worse on the test.

The researchers explain this by noting previous research showing the act of note-taking can be just as important as a later study of notes in helping students learn. When done with pen and paper, that act involves active listening, trying to figure out what information is most important, and putting it down. When done on a laptop, it generally involves robotically taking in spoken words and converting them into typed text.

Makes sense to me. No matter how good a typist you are, writing by hand is a more natural process that doesn’t engage your entire brain—but it’s also slower. You have to figure out what’s being said and how to paraphrase it, and that act is part of learning. Rote note taking isn’t.

Plus of course laptops are distracting. So put ’em away. Use the Cornell system if you want a system. But either way, use pen and pad, not keyboard and mouse.