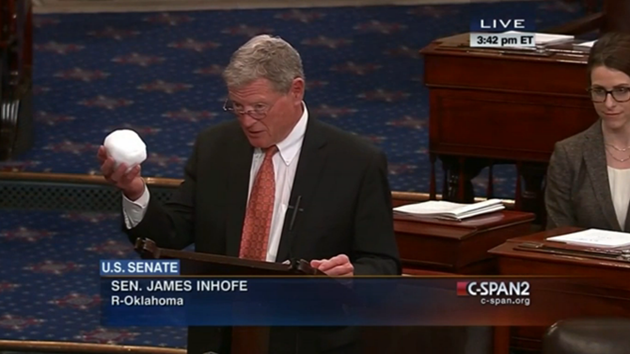 One of the most significant obstacles to addressing climate change is the fact that huge numbers of US politicians reject the overwhelming scientific consensus that humans are warming the planet. Why does the situation persist? How can a senator who (literally) holds up a snowball as evidence that global warming is a hoax keep winning reelection? How can someone who declares himself a climate “skeptic” be a front-runner for the GOP presidential nomination? As newly released research from the Yale Project on Climate Change Communication makes painfully clear, GOP climate deniers actually hold views that are quite similar to those of the voters who elect them.

The Yale research is based on data from more than 13,000 survey responses since 2008. It estimates that nationwide, just 48 percent of people agree with the scientific consensus that global warming is caused “mostly” by humans. While other recent polls have found a somewhat higher percentage who say they believe humans are causing the planet to warm, Yale’s numbers are not a good sign for those—like billionaire activist Tom Steyer—who are trying to turn climate change denial into a disqualifying political position.

Things look even more discouraging when you use the researchers’ snazzy interactive maps to break down the estimates by congressional district. The blue districts on the map below are places where the researchers’ statistical model predicts that fewer than half of respondents believe that humans are primarily responsible for climate change. Yellow/orange districts are places where at least half of respondents accept the scientific consensus. As you can see, there’s an awful lot of blue—according to the data, 58 percent of US congressional districts have majorities that don’t accept the climate science. 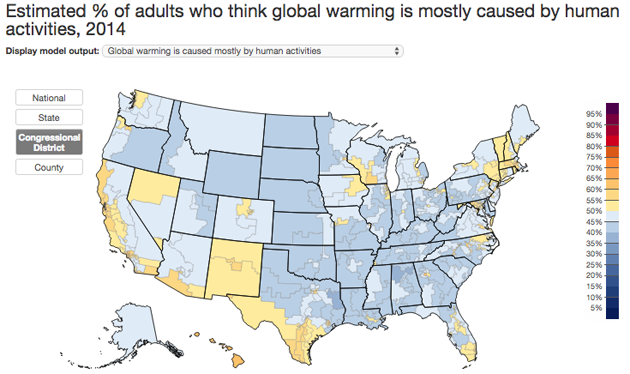 The margin of error on the data makes it impossible to rank with certainty the districts with the most climate denial. Still, the two darker blue portions on the map are noteworthy—these are the only congressional districts in the country in which under 40 percent of residents are estimated to accept the scientific consensus. Texas’ 1st District (where 38 percent believe the science) is represented by Louie Gohmert, a Republican who thinks that the world “may be cooling” and that the rising level of carbon dioxide is a good thing because it will mean “more plants.” Alabama’s 4th District (39 percent believe climate science) is represented by Republican Robert Aderholt, who has argued that “Earth is currently in a natural warming cycle rather than a man-made climate change.” And it’s hard to see on the map, but California’s 12th District has the highest percentage of residents projected to believe that humans are causing climate change—65 percent. That district is in San Francisco, and it’s represented by House Democratic Leader Nancy Pelosi.

Adding elected officials’ party affiliations to the Yale data makes it clear that these aren’t simply one-off examples: In the average district with a Democratic member of Congress, 54 percent of adults believe humans are largely responsible for global warming; in the average GOP-controlled district, less than 46 percent agree. 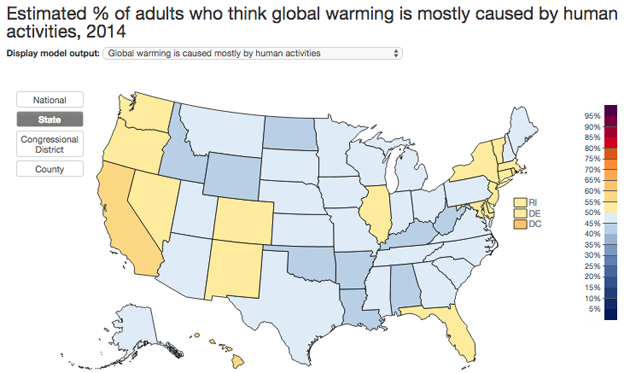 In Oklahoma—home to snowball-wielding climate denier Sen. James Inhofe—just 44 percent of residents believe humans cause global warming, according to the researchers’ estimates. The same is true in Kentucky, which is represented in the Senate by Republican presidential hopeful Rand Paul. Paul has said that he’s “not sure anybody exactly knows why” the climate is changing.

One final note: Take a look at the early presidential primary and caucus states—Iowa, New Hampshire, South Carolina, and Nevada. According to the Yale data, none of these states have majorities that accept the scientific consensus. (Nevada, at 50 percent, is the best of the four.) And when you consider that Republican primary voters are far more hostile to climate science than the general population, there seems to be very little incentive for GOP presidential candidates to embrace the truth about global warming.