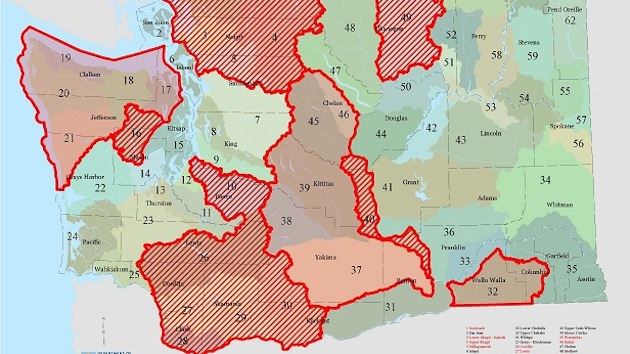 Drought areas in Washington State, apple kingdom of the US. Image: Department of Ecology, State of Washington

California’s been getting all the attention, but it isn’t the only agriculture-centric western state dealing with brutal drought. Washington, a major producer of wheat and wine grapes and the source of nearly 70 percent of US apples grown for fresh consumption, also endured an usually warm and snow-bereft winter.

The state’s Department of Ecology has declared “drought emergencies” in 24 of the state’s 62 watersheds, an area comprising 44 percent of the state. Here’s more from the agency’s advisory:

Snowpack statewide has declined to 24 percent of normal, worse than when the last statewide drought was declared in 2005. Snowpack is like a frozen reservoir for river basins, in a typical year accumulating over the winter and slowly melting through the spring and summer providing a water supply for rivers and streams. This year run-off from snowmelt for the period April through September is projected to be the lowest on record in the past 64 years.

The drought regions include apple-heavy areas like Yakima Valley and the Okanogan region. Given that warmer winters—and thus less snow—are consistent with the predictions of climate change models, the Washington drought delivers yet more reason to consider expanding fruit and vegetable production somewhere far from the west coast. That’s an idea I’ve called de-Californication (see here and here). But we’ll need a new term to encompass the northwest. De-westernization? Doesn’t have quite the same ring.