As you may recall, a couple of weeks ago there was a minor hoorah over a military training exercise called Jade Helm, scheduled to take place this summer in various states in the southwest. A few lunatics in Texas got wind of this, along with a map or two, and decided that Jade Helm was really just a pretense for President Obama to take over Texas.

Sadly for me, this all happened while I was near the bottom of my chemotherapy regimen and I barely had enough energy to make an occasional run to the bathroom, let alone write blog posts about stuff like this. Today, however, the fine folks at PPP have given me a second bite at the apple. They polled a bunch of Republicans about Jade Helm, and then broke down the answers by which candidate they currently support. Here are the results: 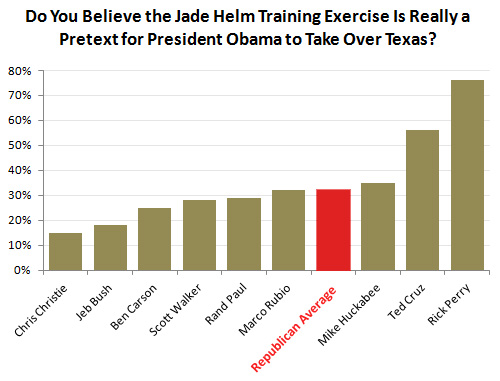 Apparently a full third of the Republican base believes that President Obama plans to order the military to take over Texas. Booyah! And supporters of Ted Cruz and Rick Perry—who are probably mostly from Texas—believe this idiocy by 60-70 percent.

So what do we take from this? I think there are two main interpretations:

I’m inclined to the second interpretation myself. It’s all good fun, but no, I don’t think that a third of Republicans really believe this nonsense. It’s just their way of showing that they’re members in good standing of the political faction that believes Obama is capable of anything in his power-mad struggle to turn the United States into a socialist hellhole. The rest is just fluff.