As long as we’re on the subject of how poor people get screwed in the United States, the Washington Post revisits an old favorite today: the way hospitals gouge the uninsured. Here’s their summary of a new study that looks at the 50 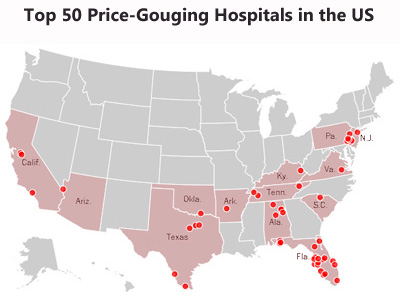 All but one of the these facilities is owned by for-profit entities, and by far the largest number of hospitals — 20 — are in Florida. For the most part, researchers said, the hospitals with the highest markups are not in pricey neighborhoods or big cities, where the market might explain the higher prices.

….Community Health Systems operates 25 of the hospitals on the list; Hospital Corp. of America operates another 14. “They are price-gouging because they can,” said Gerard Anderson, a professor at Johns Hopkins Bloomberg School of Public Health, co-author of the study in Health Affairs. “They are marking up the prices because no one is telling them they can’t.”

….Most hospital patients covered by private or government insurance don’t pay full price because insurers and programs like Medicare negotiate lower rates for their patients. But the millions of Americans who don’t have insurance don’t have anyone to negotiate on their behalf. They are most likely to be charged the full hospital price. As a result, uninsured patients, who are often the most vulnerable, face skyrocketing medical bills that can lead to personal bankruptcy, damaged credit scores or avoidance of needed medical care.

It’s hard to find the words to describe how loathsome this is. It’s a structure deliberately designed to bleed the maximum possible amount from the people who are least able to afford it and least able to fight back. We normally associate this kind of thing with Charles Dickens novels, or with thugs in leather jackets who have a habit of breaking kneecaps. But these thugs all wear suits and ties.

I’m not really sure how they sleep at night, but I guess they find a way.