As I’m sure everyone knows by now, flying the the Confederate battle flag on the grounds of the state house is hardly a longtime South Carolina tradition. In fact, it’s only been up since 1961. I was googling around on a different but related subject and happened to come across this account of how it happened. It’s written by Brett Bursey and based mainly on the recollections of Daniel Hollis. In 1959 President Eisenhower commissioned a national Civil War Centennial, and Hollis was named a member of South Carolina’s commission to plan the state’s observance of the 100th anniversary of the War Between the States.

Hollis remembers the day the Confederate flag was hoisted over the State House to commemorate the war. The centennial kicked off on April 11, 1961, with a re-creation of the firing on Fort Sumter. The flag went up for the opening celebrations.

“The flag is being flown this week at the request of Aiken Rep. John A. May,” reported The State on April 12. May didn’t introduce his resolution until the next legislative session. By the time 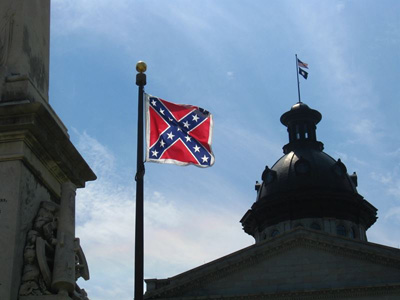 the resolution passed on March 16, 1962, the flag had been flying for nearly a year. (This explains why the flag is often erroneously reported to have gone up in 1962).

“May told us he was going to introduce a resolution to fly the flag for a year from the capitol. I was against the flag going up,” Hollis said, “but I kept quiet and went along. I didn’t want to get into it with the UDC [United Daughters of the Confederacy] girls.” The resolution that passed didn’t include a time for the flag to come down and, therefore, “it just stayed up,” Hollis said. “Nobody raised a question.”

….The day the flag went up, headlines in the local newspapers were full of unrest. Besides the centennial controversy, the news that week included:

Hoisting the Confederate flag over the State House didn’t generate any controversy at the time. Perhaps those most offended by it were too busy fighting real-life battles to expend any energy on symbolic ones.

So the flag went up partly to commemorate the Civil War and partly as a fairly safe way to protest against the civil rights movement. In either case, it’s hardly a legacy issue that strikes at the honor of the Palmetto State. It was originally intended to stay up for only a year, and South Carolinians would do well to remember that. The year is long since up. Take it down.