We now live in the blessed era of dynamic scoring, something that Republicans have lusted over for decades. When the Congressional Budget Office makes economic projections, it can no longer just look at spending and taxes and subtract one from the other to get deficits. No siree. First they have to 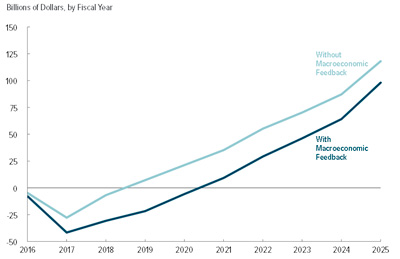 pay homage to the Laffer Curve and acknowledge that lower taxes will supercharge the economy and higher taxes will tank the economy. Then they recompute how much tax revenue they’re really going to get.

Anyway, CBO is now required to do this, so here’s their projection about how Obamacare will affect the federal deficit. Under the old-fashioned method, it will lower the deficit by $118 billion in 2025. But using the sleek new dynamic scoring system insisted on by Republicans, the truth becomes evident and Democratic evasions are exposed for all the world to see. Obamacare will, um, still reduce the deficit. But only by $98 billion.

In truth, this stuff is so open to interpretation and assumptions (and future congressional action) that neither number means much. Still, if you want to know if Obamacare pays for itself using our best estimates, it does. Even using dynamic scoring, it pays for itself. That’s more than Republicans ever do with their programs.