Larry Summers thinks it will be a catastrophe if Greece repudiates its debt and “financially separates from Europe.” Greece will become a failed state; Europe will face a refugee crisis; and both Europe and the IMF will face huge defaults on their loans. Oh, this might not cause financial contagion throughout all of Europe, but then again, that’s what everyone said about Long-Term Capital Management, 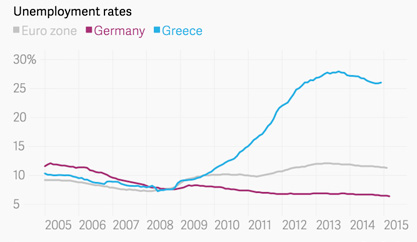 subprime mortgages, and the fall of Lehman Brothers. And look what happened there.

So what does Summers think should happen? Here’s his prescription:

Greek Prime Minister Alexis Tsipras needs to do what is necessary to make reaching an agreement politically feasible for his fellow Europeans….He needs to be clear that he will accept further value-added tax and pension reforms to achieve primary surplus targets this year and next, but that he expects a clear recognition that if Greece does its part, debt will be written off on a large scale.

German Chancellor Angela Merkel and European authorities must do what is necessary to make policy adjustments politically tenable in Greece. That means acknowledging that the vast majority of the financial support given to Greece has gone to pay back banks rather than to support the Greek budget. They must agree on debt relief and recognize the degree of adjustment in Greek spending that has taken place: with nearly 30 percent of government workers laid off. It also means announcing their intention to accelerate economic growth throughout Europe.

In case that wasn’t clear, here’s a translation: the leaders of Europe are idiots. Everyone with a room temperature IQ has known for years that something like this is the deal that needs to be made. It’s been discussed endlessly in meeting rooms, op-eds, scholarly papers, and conferences. Not only is it not a secret—or rocket science—it’s been the obvious solution forever. But Europe vs. Greece is now like the Hatfields vs. the McCoys. Nobody cares anymore how it started, whose fault any of it was, or what the catastrophic results of continued obstinacy will be. They don’t even care much about inflicting pain on their own people as long as they also inflict pain on the other side.

They are idiots. Not stupid, mind you, but idiots all the same. They know what needs to be done. They’re just too committed to their own resentment and outrage to do it.