Texas offers its driving public a vast array of specialty license plates. Most of them are designs submitted by private organizations, which then go through an approval process by the Texas Department of Motor Vehicles Board. If they approve it, it goes on sale.

Recently, the Sons of Confederate Veterans submitted a design that included the Confederate battle flag. They were turned down. Yesterday the Supreme Court upheld the Board’s decision on the grounds that license plates are government speech, not private speech, and therefore the government gets to decide what it does and doesn’t want to say. The dissenting minority called this ridiculous: If you see a license plate that says “Drink Pepsi,” would anyone 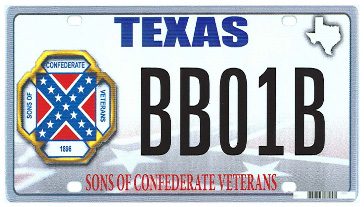 seriously think the government of Texas was endorsing Pepsi? Of course not. It’s private speech.

It’s a sticky wicket. It’s also one I don’t understand. Here’s an excerpt from the majority opinion:

The Board must approve every specialty plate design proposal before the design can appear on a Texas plate. And the Board and its predecessor have actively exercised this authority. Texas asserts, and SCV concedes, that the State has rejected at least a dozen proposed designs.

Right. Nor do they have to approve a design celebrating the KKK or Lee Harvey Oswald. Doesn’t this seem more germane than a fight over First Amendment issues? Unless Texas is literally required to accept anything and everything that’s submitted, they obviously have to be allowed to reject designs they find offensive. At that point, it’s just a matter of what process is required to decide a design is offensive. That’s it.

Now, if the Supreme Court thinks their process is defective, that’s fine. Tell them what minimum requirements they have to fulfill. But surely that’s the only real issue at hand. The Board plainly has the right to turn down designs. The only question is how they go about it. Why not issue a ruling on these grounds instead?