The Greek austerity proposal has been approved by parliament, and since it’s essentially identical to the European demands of two weeks ago, everything should now be hunky dory, right? 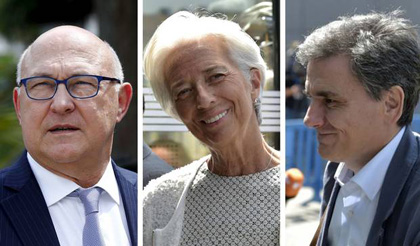 The Europeans will accept the Greek capitulation and move on.

Um, no. Emergency talks in Brussels are being held around the clock this weekend, and there are still a couple of big sticking points.

First: The new proposal is much bigger than the previous one. Back in June, Greece was asking for about €7 billion in loans that would cover its needs for a few months. Now it’s asking for €53 billion over three years, and European experts think even that number is too optimistic. Greece will really need about €74 billion—plus additional funds to recapitalize Greek banks, which have basically disbursed all their cash over the past couple of weeks. This raises several concerns:

Second: No one trusts Greece even slightly. The Europeans have never trusted the Greeks to implement the deals they agree to, and they still don’t. “What guarantees can Greece give they are actually going to implement what they propose?” Austrian finance minister Hans Jorg Schelling asked bluntly, echoing similar questions from the Dutch finance minister and others. Even Greek allies like France need to be convinced of Greek goodwill. “Confidence has been ruined by every Greek government over many years which have sometimes made promises without making good on them at all,” said French finance minister Michel Sapin.

After the events of the past two weeks, the issue of trust is even worse. Dutch state secretary Eric Wiebes notes that the commitment of the Greek government is a key concern. “That has been the weak point because, after all, we are discussing a proposal from the Greek government that was fiercely rejected a week ago.” And to make things worse, although the Greek parliament approved the latest proposal, it caused a serious schism in the Syriza party, with many members voting against it. “The parliamentary majority of the government now in Athens is being eroded,” Irish finance minister Michael Noonan said, “and they may not have the capacity to implement the measures they have agreed as time goes by.”

Things have now degraded to such a dire point that German finance minister Wolfgang Schauble has even floated the idea of a “temporary” five-year Greek exit from the euro. This is so batty that almost everyone else at today’s talks—including some of Greece’s strongest skeptics—thinks it’s both ridiculous and probably illegal too. But even though it’s not likely to be taken seriously, it does indicate just how frosty the Germans are toward any new bailout deal with Greece. It also gives ammunition to Greek critics who have maintained for weeks that Germany’s real goal is to kick Greece out of the euro.

So there you have it. The June proposal from the Europeans may have been OK two weeks ago, but it’s now past its sell-by date. Getting European buy-in to a new, third bailout for Greece continues to be a very delicate and knotty problem. Stay tuned.