I somehow missed that this was a real thing, but apparently there are finally serious moves afoot to replenish the Highway Trust Fund. Will this happen by sensibly returning the gasoline tax to its old rate? Don’t be silly. Instead we’re going to do it in the least sensible way possible:

A bipartisan proposal, to be introduced soon in Congress, would tax the estimated $2 trillion in foreign profits held by U.S. corporations in overseas accounts….The tax would generate tens of billions of dollars for the federal Highway Trust Fund, which will run out of money at the end of the month. Lawmakers have been in a desperate scramble 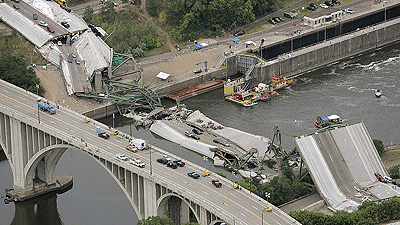 to replenish the fund, which helps pay for new roads, bridges and other transportation infrastructure.

….Supporters said the plan would reduce incentives for companies to reincorporate overseas, a controversial tax-reducing tactic known as inversion that has drawn the ire of Democrats….”These proposals would right the ship, provide a potential funding source for transportation reauthorization and allow the United States to compete on a level playing field,” [Sen. Chuck Schumer] said.

Hold on. We’re going to take all those overseas profits that are currently untaxed, and levy a one-time tax on them in order to fund roads and bridges? Why would Republicans and the business community support this? Here’s why:

“In a perfect world, you wouldn’t tie tax reform to the Highway Trust Fund,” said Curtis S. Dubay, a tax expert at the conservative Heritage Foundation. But lawmakers see the need to find highway funding “as a forcing mechanism to get something done” on international taxes.

A “forcing mechanism”? Please go on:

The U.S. Chamber of Commerce and National Assn. of Manufacturers have said they opposed a forced repatriation of foreign earnings simply to replenish the Highway Trust Fund.

But including it as part of a shift from the current international tax system — a move that would reduce corporate tax bills over the long term — changes the equation, said Dorothy Coleman, who handles tax policy for the manufacturers group.

….Business groups want changes to the international tax system to be made as part of a broader overhaul that includes lowering the corporate tax rate for domestic earnings as well. Senate Majority Leader Mitch McConnell (R-Ky.) has indicated that he prefers a comprehensive tax overhaul.

Roger that. The business community is willing to support a small, one-time gimmick that will cost around $200 billion or so—and free them to repatriate all their foreign earnings and bring that money back to the US—but only if it’s tied to a large, permanent corporate tax change that will save them far more in the long run. Suddenly it all makes sense.

The devil is in the details, of course, and those won’t be available for months. If the final bill is revenue neutral on corporate taxes, maybe this is a decent short-term dodge. If it cuts corporate taxes significantly, then not so much. Stay tuned.