Yesterday the New York Times ran a story saying that Supreme Court Justice Clarence Thomas hoisted language from briefs submitted to the court “at unusually high rates.” I was curious to see the actual numbers, so I opened up the study itself. Here’s the relevant excerpt from Figure 2: 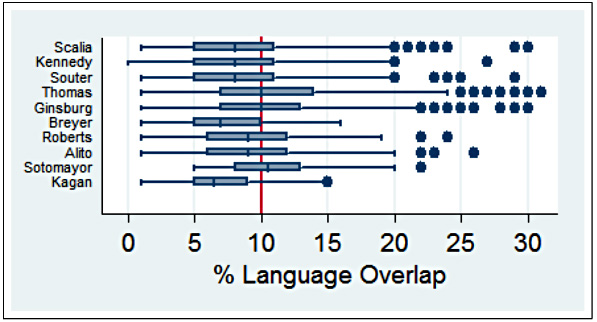 I dunno. Does that look “unusually high” to you? It looks to me like it’s about the same as Sotomayor, and only a bit higher than Ginsburg, Alito and Roberts. It’s a little hard to see the news here, especially given this:

Since his views on major legal questions can be idiosyncratic and unlikely to command a majority, he is particularly apt to be assigned the inconsequential and technical majority opinions that the justices call dogs. They often involve routine cases involving taxes, bankruptcy, pensions and patents, in which shared wording, including quotations from statutes and earlier decisions, is particularly common.

So at most, Thomas uses language from briefs only slightly more than several other justices, and that’s probably because he gets assigned the kinds of cases where it’s common to do that. Is there even a story here at all?