The New York Times reports that Republican leaders are alarmed at one particular aspect of Donald Trump’s popularity:

In recent weeks, Mr. Trump has threatened to impose tariffs on American companies that put their factories in other countries. He has threatened to increase taxes on the compensation of hedge fund managers. And he has vowed to change laws that allow American companies to benefit from cheaper tax rates by using mergers to base their operations outside the United States.

Alarmed that those ideas might catch on with some of Mr. Trump’s Republican rivals — as his immigration policies have — the Club for Growth, an anti-tax think tank, is pulling together a 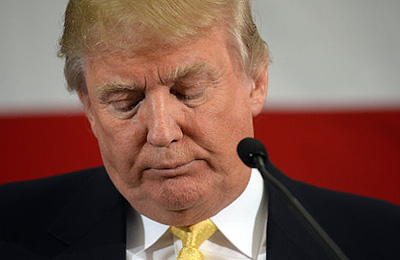 team of economists to scrutinize his proposals and calculate the economic impact if he is elected.

First things first: Trump and the Club for Growth have been feuding ever since Trump entered the race. The Club says it’s because Trump had previously supported universal health care and a one-time tax on individuals worth more than $10 million. Trump says it’s because the Club tried to shake him down for a $1 million donation and he refused to give it to them. The truth is—oh, who cares what the truth is? It’s just another Trump feud.

Anyway, Trump repudiated his wealth tax idea a long time ago, but he has supported (a) a progressive income tax, (b) closing loopholes for hedge fund managers, (c) tariffs on companies that move factories to Mexico, and (d) corporate inversions. But wait! In his interview with Sarah Palin, Trump inched closer to Republican orthodoxy on taxes:

We have to simplify our tax code. You have hedge fund guys that are paying virtually no tax and they’re making a fortune….Now you can go to a fair tax or a flat tax, but the easiest way and the quickest way, at least on a temporary basis, is simplification of the code: get rid of deductions, reduce taxes.

OK. So Trump definitely wants to eliminate the carried-interest loophole that allows hedge fund managers to pay very little in federal income tax. But he’s no longer opposed to a flat tax. It’s just that on a “temporary” basis he wants to broaden the base and reduce rates. This is as orthodox as it gets.

As for the tariffs on companies that move to Mexico, that’s just bluster not to be taken seriously. And reining in corporate inversions is a pretty bipartisan goal. It would presumably be part of a corporate tax overhaul that would end up being revenue neutral.

On taxes, then, Trump has all but caved in. The only serious part of his schtick that’s no longer garden-variety Republican dogma is his desire to close the carried-interest loophole. And even this is small potatoes: it would raise one or two billion dollars per year, which could easily be offset by a tiny tax cut somewhere else. There’s really nothing left for even Grover Norquist to dislike.

So no worries! Trump is becoming fully absorbed by the Republican borg on taxes. Aside from the Mexico stuff, which is just campaign trail bombast, there’s nothing left that would raise net taxes or offend conservative sensibilities in any way. Whew.