Should Hillary Clinton’s recent spate of problems (Bernie Sanders, the email server, sagging favorability numbers) be enough to make people nervous about her chances of winning the Democratic nomination? I can answer that in four words:

In the early stages of primaries, people get nervous about candidates all the time and start tossing out bizarre ideas (Hillary will get indicted, maybe Joe Biden should run, etc.). But even strong candidates never win all the votes or cruise to victory without any problems. With the exception of incumbents running unopposed, you should expect that no candidate will get more than 60-70 percent of the vote. The fact that Bernie Sanders 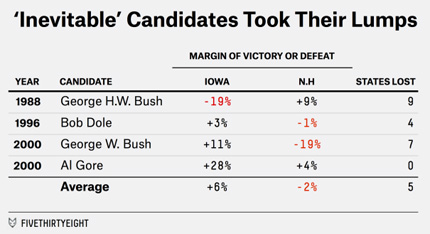 is polling at 30 percent or so isn’t a sign of Hillary Clinton’s weakness. It’s a sign of a perfectly normal campaign. Nate Silver goes into more detail:

Being “inevitable” doesn’t mean you’ll sweep through all 50 states with no opposition. In the modern era (since 1972), the non-incumbent candidates who were similarly “inevitable” to Clinton, judging by the number of endorsements they had early on in the race, were Bob Dole in 1996, Al Gore in 2000, and George W. Bush in 2000. You can probably also add George H.W. Bush in 1988 to the “inevitable” list; he had a narrower endorsement lead but was the presumptive Republican nominee by virtue of being the sitting vice president.

Among these candidates, only Gore went undefeated in the primaries (and Bill Bradley came within a few percentage points of beating him in New Hampshire). In 1988, George H.W. Bush finished third in Iowa — behind Dole and Pat Robertson. In 1996, Dole lost New Hampshire to Pat Buchanan. George W. Bush lost badly to John McCain in New Hampshire in 2000.

….In Sanders, Clinton has drawn an opponent who is relatively well suited to New Hampshire and Iowa….Based on current polling averages, Sanders would almost exactly replicate Bradley’s performance in 2000, losing Iowa by double digits, giving Clinton a close call in New Hampshire, then losing badly once the calendar turned to more populous and diverse states. Or Sanders could do better than that, winning New Hampshire and a few other states in New England, the Upper Midwest or Pacific Northwest, perhaps along with one or two surprises elsewhere. But that too would be consistent with the losses that “inevitable” candidates like Clinton have endured in the past.

Silver goes on to say that emailgate doesn’t seem to have hurt Hillary much (the slide in her approval ratings was both slow and inevitable) and she was going to get lots of unflattering press coverage no matter what she did. He puts her chances of winning the nomination at an unchanged 85 percent.

Barring some kind of epic meltdown, I’d put it even higher. I just don’t see any credible competition out there: Bernie Sanders has a fairly low ceiling and it’s too late for Joe Biden to get in. And so far, at least, I don’t see much evidence that her email server problems are serious enough to cause any permanent damage.

It’s traditional for leading candidates to inspire a movement to stop them. It’s so traditional, in fact, that there’s even a name for it: AB__. That is, “Anybody But ______ .” If Hillary Clinton inspires a similar movement, she’ll be in illustrious company.