In his interview with Sean Hannity last week, Donald Trump said the unemployment rate wasn’t 5.3 percent, as the Bureau of Labor Statistics says. “That’s phony math,” he told Hannity. “If you add it up, it’s probably 40 percent, if you really think about it.”

Was this just a one-off comment because he was trying to bond with Hannity? Or was it another budding Trump meme? Today, in an interview with Time, Trump doubled down:

If you start adding it up, our real unemployment rate is 42%.

Trump saw a chart! Here it is, if you’re interested. I like charts too, so I guess that’s OK. And Trump is right about one thing: roughly 93 million people (42 percent of the adult population) aren’t employed. But why aren’t they employed? Let’s check out another chart for the 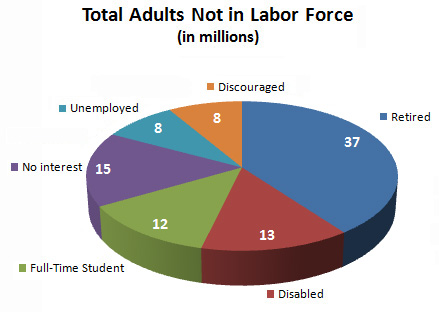 answer. I don’t think I’ve ever created a pie chart before, but that seems appropriate for a Donald Trump post, don’t you think? In fact, let’s make it a 3-D pie chart.

As you can see, there are indeed about 93 million people who aren’t working. The vast majority of them, however, are retirees, the disabled, full-time students, and folks who have no interest in working (stay-at-home parents, etc.). There are about 8 million unemployed, and about 8 million more who are underemployed or would like to work but have given up trying to find a job. If you add up those two categories you get the U6 unemployment rate, currently at 10.7 percent.

You can make a case for using U6 as your preferred metric of unemployment. But counting retirees? Or students? Or the disabled? Or parents taking care of children? Sorry, but no.

POSTSCRIPT: I threw together the numbers in the chart pretty quickly. They’re all in the ballpark of being accurate, but could be off by a little bit. Frankly, a more detailed dive just didn’t seem worth it.