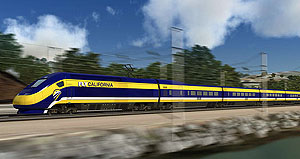 Atrios has a complaint about the way people talk about rail travel:

One thing I find annoying is that when people are discussing SUPERTRAINS — even rail advocates — there’s a tendency to feel the need to “compete” with air travel. You know, saying that yes, it takes longer, but not when you account for the need to get to/from airports, airport security, and that trains are generally city center to city center. All good points! But it overlooks the fact that lots (and lots) of people regularly make 10-12 hour drives. Apparently driving long distances is highly competitive with air travel!

This isn’t an argument justifying public expenditure on rail infrastructure. I’m just pointing out that plenty of people do not choose air travel when doing 400+ mile journeys. They drive. Yes we know it doesn’t take long to fly from LA to San Francisco. It takes quite a long time to drive. And lots of people drive.

Well, yes, but once you get past a couple hundred miles, trains really are competing primarily with air travel. Reliable numbers are hard to come by, but you’ll be in the ballpark if you figure that air and auto travel each account for about 6-8 million passengers per year between the LA metro area and the Bay Area. But the people who choose to drive from LA to San Francisco are usually doing it for a specific reason. They need to make stops along the way. They want a car once they get up there. It’s cheaper for a family of four (or four college kids) than four plane tickets. Etc. These are all people who could take a plane, but choose not to. But if they choose not to take a plane, why would they take a train?

Conversely, virtually 100 percent of air travelers are part of the target market for trains. These are people who have already decided to travel via commercial carrier, and if the train is better (i.e., cheaper, more convenient, faster, whatever) there’s no reason they won’t switch to rail. In other words, of those 6-8 million air travelers, all of them are good targets for the rail market. But of the 6-8 million auto travelers, I’d guess that no more than a million of them are good targets. Every business plan I’ve seen for high-speed rail does include discussion of auto travel, but for the most part, it really does make sense to focus primarily on air travel here.