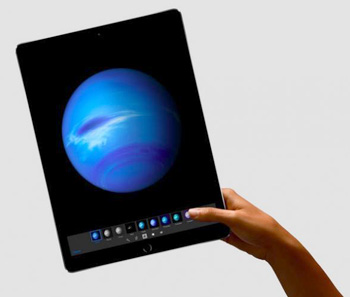 Android watches.1 And now, as Will Oremus points out, the iPad is catching up with Microsoft’s Surface Pro:

The iPad Pro’s screen measures 12.9 inches diagonally, making it far bigger than any tablet Apple has made before—but comparable in size as the 12-inch Microsoft Surface Pro 3. It features a split-screen mode for multitasking and is optimized for productivity apps like Microsoft Office. And its two most notable accessories are—what else?—a keyboard cover and a stylus.

Close, but no cigar! Everything Oremus says is true, but if you’re going after the business market I’d say that a high-quality docking station is probably the key accessory. Microsoft has a very nice one for the Surface Pro. Apple doesn’t.

Maybe it’s coming soon, but Apple didn’t want to delay the iPad Pro just for that. Or maybe Apple still doesn’t really get the business market.

But I’ll give Apple this: they sure do know how to make a lightweight device. I assume this is because their ARM processors are more power stingy than even the newest Intel processors, which allows Apple to use smaller batteries. But whatever it is, I’m jealous. It’s not like my Surface (non-Pro) is a brick or anything, but shaving another eight ounces off it would sure be nice.

But light or not, the lack of a docking station would prevent me from using the iPad pro as a serious business device. In most homes and offices, you’re going to want to connect a keyboard/mouse, network cable, a local printer, and maybe an external hard drive. Plus a bigger monitor if you decide to go that route. Someday all this stuff will be effortlessly wireless, but that day is not today. For now, the only way to make this work conveniently is with a docking station.

1None of this is to say that Apple can’t make good money playing catch-up. They can. And stealing features from the competition is practically the definition of the tech industry. Still, they’ve been going after low-hanging fruit for the past few years. I’m not seeing an awful lot of visionary thinking anymore.