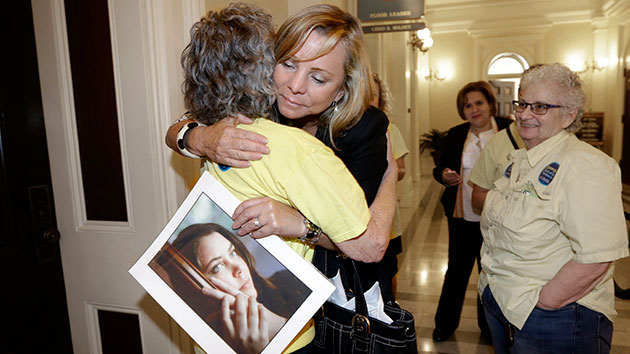 Debbie Ziegler holds a photo of her daughter, Brittany Maynard, after a right-to-die measure was approved by the California Assembly.Rich Pedroncelli/AP

Back in June, California Gov. Jerry Brown called a special session of the legislature to deal with highway funding and health care financing. That special session is now over, and no agreement was reached on either of those things. But that’s no reason to waste a special session, and legislators did manage to pass bills on drone regulation, medical marijuana, climate change, oil spills, a Los Angeles County transit tax, family leave, racial profiling, and several other things.

They also took advantage of the fact that committee assignments are different during special sessions to resurrect an aid-in-dying bill that had failed earlier in the year:

The End of Life Option Act, which passed in the state Assembly Wednesday, would allow patients to seek aid-in-dying options so long as they are given six months or less to live by two doctors, submit a written request and two oral requests at least 15 days apart and possess the mental capacity to make their own health care decisions.

If you pass these hurdles, you’ll get a prescription for a lethal dose of sedatives. You can then decide for yourself if and when you ever use them. The California bill, which is modeled on a similar law in Oregon, sunsets after 10 years and includes a requirement that doctors speak to the patient privately. Will these safeguards be enough to persuade Brown to sign it? No one knows:

“You’d need some kind of séance to figure out what he’s going to do,” says Jack Citrin, director of the Institute of Government Studies at UC Berkeley. “He plays his cards very close to the vest.”

….Brown is Catholic, even at one point considering becoming a priest….”He’s in an interesting dance with the Catholic Church,” says Gar Culbert, a California State University-Los Angeles political science professor. “He wants the church to participate in advocating for policies that are environmentally friendly, so he wants to stay on good terms.”

Brown might also feel that the bill’s safeguards against abuse still aren’t sufficient:

In spite of the bill’s provision about coercion, Dr. Aaron Kheriaty, director of the medical ethics program at the University of California, Irvine, School of Medicine, said that low-income and underinsured patients would inevitably feel pressure from family members to end their own lives in some cases, when the cost of continued treatment would be astronomical compared with the cost of a few lethal pills.

He pointed to a case in Oregon involving Barbara Wagner, a cancer patient who said that her insurance plan had refused to cover an expensive treatment but did offer to pay for “physician aid in dying.”

“As soon as this is introduced, it immediately becomes the cheapest and most expedient way to deal with complicated end-of-life situations,” Dr. Kheriaty said. “You’re seeing the push for assisted suicide from generally white, upper-middle-class people, who are least likely to be pressured. You’re not seeing support from the underinsured and economically marginalized. Those people want access to better health care.”

There isn’t much to say to people who object to assisted suicide on religious grounds. If the Catholic Church says it’s a sin, then it’s a sin.

For Catholics, anyway. But that shouldn’t affect the rest of us. We should be allowed to decide this on secular grounds. And with the obvious caveat that nothing is ever perfect, the safeguards in this bill are pretty good. Here are a few bullet points:

I want to add an additional, more personal argument. A few years ago a friend’s father was dying of cancer. He was a physician himself, and had decided long before to take his own life before he lost the ability to make decisions. But because it was illegal, he had to make sure that his kids couldn’t be held even remotely responsible. So he decided not to tell anyone when the time came.

Luckily, a friend talked him out of this at the last minute. He called his kids, and they came out to say goodbye one last time. But it was a close-run thing. If that hadn’t happened, his family would never have seen him before he died. They would have heard about it via a phone call from the coroner’s office.

That’s not how this should have to happen. It’s common knowledge that sometimes people who are close to death take their own lives, legal or not. But they shouldn’t have to do it earlier than necessary, just because they’re afraid they might lose the physical ability to act if they wait a little longer. Nor should they be afraid to have their family around because they want to make sure nobody is held legally responsible for assisting them.

California’s bill won’t affect very many people. Assisted suicide just isn’t a very popular option. But for those who choose that path, a safe and legal alternative is more humane both for them and for their families. Just having the option available makes it more likely that they’ll wait until they truly want to die, and that they’ll do it surrounded by their loved ones, rather than alone in a bedroom somewhere. I hope Jerry Brown thinks about this while he’s deciding whether to sign this bill.