German Lopez notes the reaction in some quarters to the recent shooting of a Texas deputy sheriff:

Despite any solid leads and facts about the motives in the shooting of 10-year deputy veteran Darren Goforth, some conservative media outlets and local law enforcement officials have already settled on the real culprit: Black Lives Matter.

….It’s not just Fox News — other reports painted narratives that put Black Lives Matter and police as inherently in conflict. A CNN report, for instance, described Black Lives Matter’s advocacy as “anti-police rhetoric.” What does it say about American society that advocating for black lives and ending racial disparities in the criminal justice system 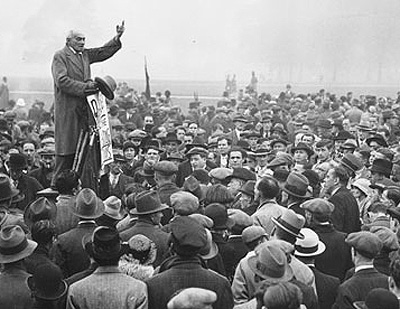 would qualify not as pro-equality but as anti-police?

That won’t stop, but it should. People and groups have to be free to condemn abortion or police misconduct or anything else—sometimes soberly, sometimes not. And it’s inevitable that this will occasionally inspire a maniac somewhere to resort to violence. There’s really no way around this. It’s obviously something for any decent person to keep in mind, but it doesn’t make passionate politics culpable for the ills of the world. We can’t allow the limits of our political spirit to be routinely dictated by the worst imaginable consequences.

This is no apology for obviously incendiary speech. If you get on your soapbox and tell your followers to kill the pigs or murder the child murderers, then you bear a share of blame for what happens next. That’s both common sense and legal reality.

But we also need common sense toward speech that’s less immediately incendiary but still fiery or angry—or both. After all, this is where change, liberal and conservative alike, comes from. It’s sadly inevitable that in a country of 300 million, even the minuscule fraction who turn that fear into a killing rampage amounts to a lot of people. But it’s neither a good reason to rein in our political vigor nor a good reason to blame passionate engagement in politics for every related tragedy. That way lies atrophy and rot.