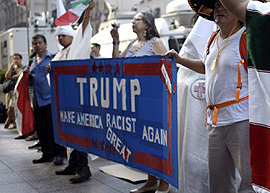 At Donald Trump’s ceremonial loyalty-oath signing on Thursday, a group of protesters showed up holding a big blue banner that read “Trump: Make America Racist Again.” A Trump security guard took offense at this sign of insolence and ripped the banner away from them. One of the protesters then chased the guard and grabbed him, at which point the guard turned around and clocked the guy. The New York Times picks up the story from there: “The Trump campaign said that the security team member on Thursday was ‘jumped from behind’ and that the campaign would ‘likely be pressing charges.'”

The banner disappeared into Trump Tower, never to be seen again. Quite rightly, I might add. This sort of impudence from losers and lightweights will not be tolerated when Donald Trump is president. Truly he is already making America great again.