From a Carly Fiorina aide, defending their absurd smear today of Jeffrey Sonnenfeld:

After more than a decade of attacking Carly’s character and misrepresenting her career, he didn’t think we would respond? I guess he’s not ready for the arena after all.

The context for this involves Trumpishly juvenile behavior from a whole cast of characters. Here’s the nickel explanation. Back in 1997, Sonnenfeld was a professor at Emory University. That year, he accepted an offer from Georgia Tech to become dean of their business school. This apparently infuriated the Emory folks so much that they reverted to their kindergarten selves and hatched a scheme to tell Georgia Tech officials that Sonnenfeld had been caught defacing campus property. Georgia Tech promptly withdrew their offer, and Sonnenfeld was forced to resign from Emory.

This whole affair was basically ginned up out of whole cloth. A few years later, Emory withdrew their accusations of vandalism, and Sonnenfeld won multimillion settlements from both Emory and Georgia Tech.

But the fact that Sonnenfeld never did the things he was accused of didn’t faze Fiorina. Last weekend Sonnenfeld wrote a Politico article criticizing Fiorina’s tenure at HP, and that couldn’t be allowed to go unanswered. In today’s post-Trump Republican Party, the rule is, “He sends one of yours to the hospital, you send one of his to the 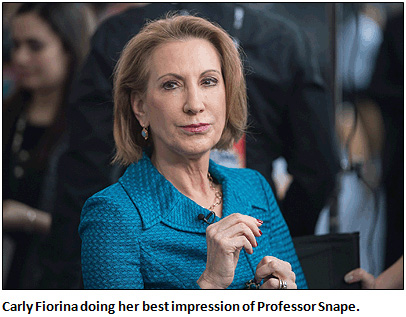 morgue.” So Fiorina had her aide send an email to reporters that said: “I’ll give Sonnenfeld this: He would know something about getting fired. Of course, his was for vandalism of school property while he was at Emory.”

Fiorina has obviously decided that imitation is the sincerest form of flattery and is bidding to become the new Donald Trump. If someone criticizes you, you hit him back in a comically heavy-handed way—and then hit him back again as a crybaby if he dares to object. This makes for good copy, and maybe that’s all that matters. But Fiorina should watch out. Trump is such a clown that he somehow makes his attacks seem like the actions of a charming rogue, not a vicious hit man. When Fiorina does it, she just looks mean.

As near as I can tell, that’s because she is. But it’s still best not to let it show too much. Just ask Scott Walker.