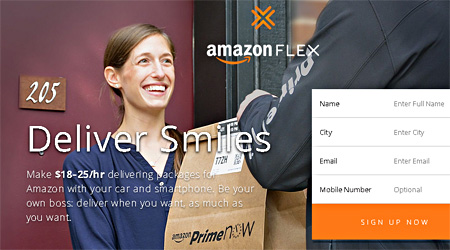 Flex, Amazon’s new on-demand delivery service, promises to get your packages to you even sooner by hiring independent drivers to bring them to your house. As a lot of reports have pointed out, Flex is basically Uber for Amazon packages.

But, speaking of Uber, how will Amazon’s leap into on-demand logistics affect the rest of the sharing economy?

….Amazon Flex says it will pay its delivery drivers $18 to $25 per hour. They can elect to drive for two-, four-, or eight-hour shifts. In exchange, they need to supply your own car, a driver’s license and an Android phone so that they can install Amazon’s driver app….Compare that to ridesharing services whose drivers get to maximize their flexibility but whose income is more variable. For some, this trade-off may be worth it.

….Amazon Flex is betting that as the economy improves, there will still be people who are willing to work in the sharing economy rather than returning to full-time jobs….Research from PricewaterhouseCoopers predicts the sharing economy will become a $335 billion business by 2025 — up from $15 billion a year today.

Let’s slow down here. What exactly is the “sharing economy”? Originally it was sort of like renting. Time rhapsodized about it in 2011: “The true innovative spirit of collaborative consumption can be found in start-ups like Brooklyn-based SnapGoods, which helps people rent goods via the Internet. Or Airbnb, which allows people to rent their homes to travelers.”

Then it morphed into “Uber for ____” companies. Uber, of course, doesn’t really allow you to share your car with other people. It’s your car and you’re the only one who drives it. Rather, Uber provides infrastructure and scale that allows you to become an on-demand taxicab whenever your schedule allows it.

Now it’s apparently morphed even further. In some sense, Uber allows you to “share” your car with your passengers. That’s a stretch, but Flex doesn’t even provide that. The only thing you’re doing is “sharing” your car with the packages you’re delivering. By that standard, all of us are part of the sharing economy, since we “share” our bodies and brains with employers in order to accomplish tasks that our employer gives us.

In this case, Amazon is doing nothing more than hiring drivers as independent contractors so that it doesn’t have to pay benefits and doesn’t have to pay them if there aren’t any packages to deliver. (You can pick your own shift, but only if a shift is available.) The only real innovation here is that Flex might1 allow you to work odd hours here and there, which is convenient if you have other commitments that prevent you from working a normal schedule. Mostly, though, it’s just Amazon taking the 21st century mania for scheduling workers on a day-to-day basis and instead scheduling them hour-to-hour.

In any case, it now seems as though the “sharing economy” is any job that’s somehow related to a scheduling app and provides workers only with odd bits and pieces of work at the employer’s whim. In other words, sort of like manual laborers in the Victorian era, but with smartphones and better pay. No wonder PricewaterhouseCoopers thinks it will grow to $335 billion over the next decade. By that standard, I’d be surprised if it didn’t break $1 trillion.

1I say “might” because it all depends. Maybe jobs really are first-come-first-serve. Or maybe Amazon will start to favor workers who regularly take as long a shift as Amazon wants them to take. Or perhaps Amazon will start to push offers out to workers, and downrate those who don’t accept them frequently enough. Who knows?