Roughly speaking, I think the reason Donald Trump will eventually flame out is because people will get tired of his act. This is the downside of getting lots of media attention: when you recycle the same sentence fragments over and over, people eventually figure out that you have nothing more to say. His supporters get bored. The press gets bored. The whole country gets bored. And while the endless insults might be amusing for a while, eventually even his fans will conclude that he sounds an awful lot like a fourth grader, not a president. In the end, Trump will end not with a bang, but a whimper.

In the meantime, though, I’m a little curious about why conservative talk radio has been so consistently gaga over Trump. For example, here’s a little snippet 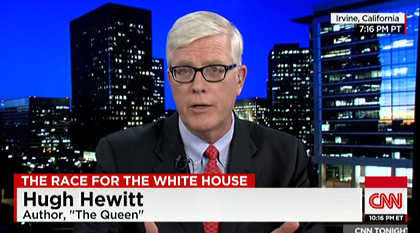 HH: You know everything about building buildings. You could build the wall. I have no doubt about that….But on the front of Islamist terrorism, I’m looking for the next commander-in-chief, to know who Hassan Nasrallah is, and Zawahiri, and al-Julani, and al-Baghdadi. Do you know the players without a scorecard, yet, Donald Trump?

DT: No, you know, I’ll tell you honestly, I think by the time we get to office, they’ll all be changed. They’ll be all gone. I knew you were going to ask me things like this, and there’s no reason, because number one, I’ll find, I will hopefully find General Douglas MacArthur in the pack. I will find whoever it is that I’ll find, and we’ll, but they’re all changing, Hugh.

….HH: Now I don’t believe in gotcha questions. And I’m not trying to quiz you on who the worst guy in the world is.

DT: Well, that is a gotcha question, though. I mean, you know, when you’re asking me about who’s running this, this this, that’s not, that is not, I will be so good at the military, your head will spin.

….HH: Last question, I want to go back to the beginning, because I really do disagree with you on the gotcha question thing, Donald Trump. At the debate, I may bring up Nasrallah being with Hezbollah, and al-Julani being with al-Nusra, and al-Masri being with Hamas. Do you think if I ask people to talk about those three things, and the differences, that that’s a gotcha question?

Here’s the thing: I don’t know if obsequious is the right word to describe Hewitt’s attitude, but it’s close. Throughout the interview he takes considerable pains to compliment Trump on every little piece of knowledge he manages to dredge up, like a teacher complimenting a dim third-grader for remembering five times three. This is despite the fact that Trump makes it crystal clear that he’s comically ignorant about practically everything that Hewitt thinks is important.

But Hewitt is no idiot. He’s a partisan warrior and a trained killer on the radio, but he’s not a stupid one. He’s a very smart guy.

So why does he put up with someone like Trump? Is it just for the ratings? Does he think Trump actually might become president? Is he embarrassed by this? Or what? Inquiring minds want to know.