I’ve written a couple of posts about Marco Rubio’s debate tiff with John Harwood, which revolves around the question of how the poor and the middle class fare under Rubio’s tax plan. Harwood wanted to know why it was so much better for the rich than the middle class, and Rubio responded by saying his plan would help the very poor a lot.

In other words, Rubio declined to answer the question and instead answered a different one. But today Dylan Matthews digs into this a bit and concludes (surprise!) that Rubio’s plan probably doesn’t even help the poor all that much:

How is Rubio helping the poor so much? Well, Rubio’s plan would replace the standard deduction and personal exemption with a $2,000 credit ($4,000 for couples)….But Rubio’s proposal, as originally laid out, is not a plain old credit. It’s a fully refundable credit. Think about that for a second. Rubio’s original proposal would give any household in America $2,000 or $4,000, no questions asked. It 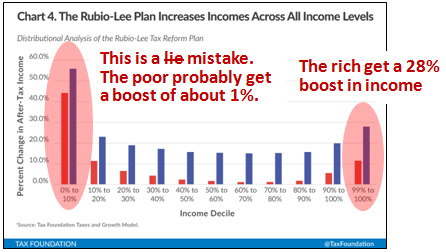 was a basic income. It was a massive increase in the welfare state of a kind that no Democratic candidate, including Bernie Sanders, is proposing.

So it’s perhaps no surprise that when I asked his team about this, they insisted that this was a mistake, and the credit was in fact much more limited. “Rules would be tailored to ensure that our reforms would not create payments for new, non-working filers,” a Rubio aide told me in April.

It’s unclear what exactly that means….Here’s the problem, though: The Tax Foundation assumed that Rubio had proposed a basic income….Given that Rubio will not, in fact, create a massive new welfare program, this finding is pretty dubious.

Still, I’m sure this was all an honest mistake on Rubio’s part, and he’ll rush to give the Tax Foundation updated information now that he realizes what he’s done. Right? He’s an honest young man, after all.