The Monmouth University Poll of likely Iowa Republican caucusgoers finds Ben Carson has taken a double digit lead over Donald Trump….When Iowa Republicans are asked who they would support in their 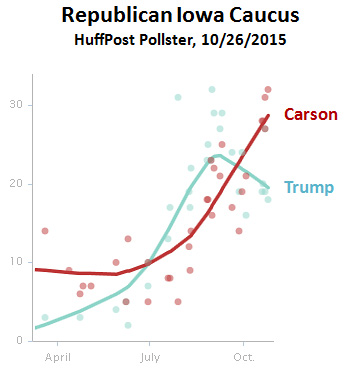 What’s left to say? Sure, the Iowa caucuses are still three months away. I suppose Carson will fade. And historically, winning the Iowa caucuses has hardly been a reliable predictor of future success. Still. On the bright side, it gives me an excuse to quote Josh Marshall on Carson:

I’ve been a little mystified that no one seems to bring this up. But in the debates he frequently strikes me as half-lost or sedated. Gut check me here, am I really the only one who has this impression? Is it just me? Again, like Trump, I think he’s judged by a different standard because people don’t think he’ll ever be the nominee. But he seems like he’s not quite all there or thinking out loud in a way that is vaguely endearing but not at all what people look for in a head of state.

Actually, Carson’s sleepy-eyed persona has been a pretty common topic of conversation. True, I don’t think anyone has suggested he’s sedated or suffering from early-onset Alzheimer’s or anything. But yeah: he’s a right-wing conspiracy-theory-loving loon and he talks as if someone just woke him up at 3 am. Even for Iowa, he’s a very strange GOP frontrunner.