Warning: Lotsa numbers ahead. Sorry about that. If you’re not interested, you can skip down to the last two paragraphs for the bottom line.

If Gaba is right, that’s an increase of about one-third from 2015. Not too bad. Still, it’s considerably less than the CBO’s original estimate of 21 million enrollees by 2016. Again, though, keep a couple of things in mind:

In other words, on an apples-to-apples basis, a best guess suggests that we’ll end up 2016 at 12 million compared to a CBO projection of 16 million. It’s still lower than CBO’s original estimates, but not by a huge amount. This could be due to (a) an overestimate by CBO, (b) weak 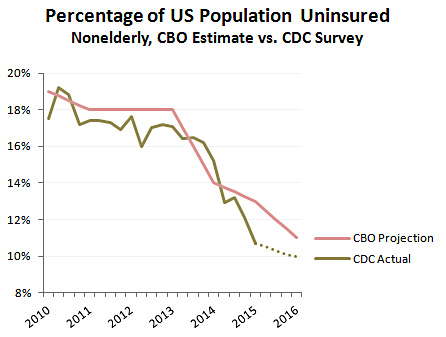 performance by Obamacare, (c) an improving economy, or (d) nothing more than a difference in how fast Obamacare ramps up.

Bottom line: Because of all this, a more reliable metric of success is to skip all the details of who’s insured via what, and simply count the total number of uninsured. CBO originally estimated that the uninsured population would drop to 8 percent by 2016.  That estimate changed after the Supreme Court made Medicaid expansion voluntary, and CBO now figures that in 2016 the total number of uninsured will come to about 11 percent. The CDC estimates that in the most recent quarter the number of uninsured dropped to 10.7 percent. If Gaba’s numbers are correct, that will decline to about 10 percent or so by the end of 2016.

In other words, once you clear away all the underbrush it looks like Obamacare is meeting or beating its goals. Some of this might be due to an improving economy, but who cares? If the economy is doing well enough that more people are getting employer coverage and fewer are being forced onto the exchanges, that’s a good thing, not a knock on Obamacare.

POSTSCRIPT: Surveys consistently show that about half of the uninsured say they’re not on Obamacare because it’s too expensive. So for anyone who’s truly concerned that Obamacare isn’t hitting its enrollment targets, there’s an easy answer: increase the federal subsidies for the working poor so that more of them can afford coverage.