I don’t know if Donald Trump will win the Republican nomination. But even if he doesn’t, it’s increasingly clear he’s going to destroy Jeb Bush before he loses….Trump insists that [George] Bush was president both prior to and during the 9/11 attacks, and he was therefore at least partly responsible for the security failures that permitted the tragedy.

I’m not so sure. As I recall, liberals spent a lot of time in the mid-aughts trying to make the case that George Bush was negligent in protecting the country before the 9/11 attacks—Exhibit A being the infamous Presidential Daily Brief titled “Bin Ladin Determined To Strike in US.” You’d think that would be pretty devastating, but it had its 15 minutes of fame and then faded out even among lefties. I doubt it will have any greater effect now, especially in a Republican primary.

What it will do, unfortunately, is almost guarantee that it comes up as a question in the next Republican debate. Debate moderators seem to be wholly unable to ignore juicy Trump bait like this. That’s too bad. I don’t really care about relitigating George Bush’s negligence 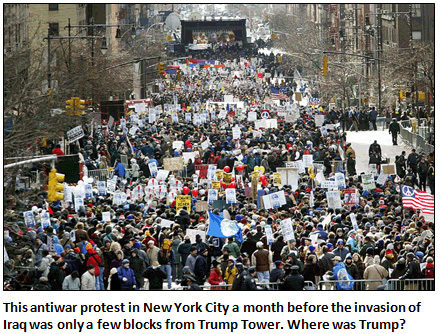 prior to 9/11, but I do care about letting Trump set the terms of the campaign. Enough.

But there is one interesting thing that might come of this. Trump has lately moved on to a more defensible criticism of George Bush, asking Jeb, “why did your brother attack and destabilize the Middle East by attacking Iraq when there were no weapons of mass destruction?” This is not interesting because of what it says about George Bush—I think we already know that—but because it gives us another chance to harass Trump for lying about his opposition to the war during the second GOP debate:

So far, no one has managed to find even the slightest record of Trump opposing the Iraq War before it started. The closest he came was a breezy comment at the Vanity Fair post-Oscar party, three days after the war started. During the day CNN had been reporting nonstop about the battle of Nasiriya, in which 11 Americans were killed and six captured—including Jessica Lynch. It was the first serious fighting of the war, and apparently it was enough to inspire a classic Trump complaint about the incompetent losers running the invasion. “The war’s a mess,” he declared to an entertainment reporter, and then swept away.

There’s zero evidence that he opposed the war before it started and zero evidence that he opposed it during its first year. It wasn’t until November 2004—nearly two years after the war started—that he finally spoke up. “I do not believe that we made the right decision going into Iraq, but, you know, hopefully, we’ll be getting out,” he said on Larry King Live. That was after Fallujah, after Abu Ghraib, and after the growth of the insurgency in Sadr City and Basra. Trump hardly gets any brownie points for turning against the war at that point.

Anyway, that would be a good question to ask Trump at the debate later this month. Where are those 25 stories about how he “fought against going into Iraq”? Where’s even one? Maybe a personal diary? Trump is not a shy man, and it’s hard to believe that he felt so strongly about this but never said anything for two long years. As I recall, there were plenty of opportunities, including one just a few blocks from his office. Let’s ask him about this.