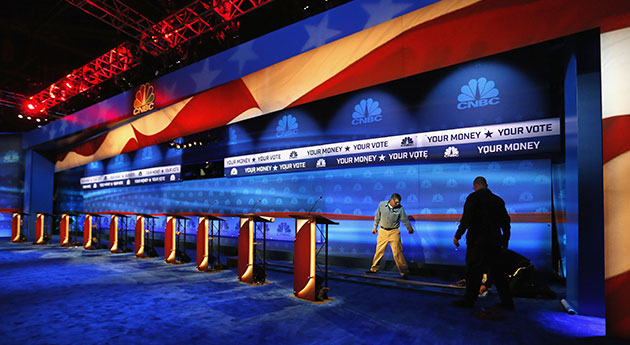 This debate was a zoo. The candidates started yelling for attention after every question like a cage of howler monkeys, and spent about as much time accusing the CNBC crew of mopery and dopery as they did answering questions. Then, in an epic show of chutzpah, they all congratulated each other at the end for conducting such a civil, substantive debate.

I honestly didn’t get a very good read on who did well and who didn’t. Jeb Bush seemed to fade into the woodwork. Donald Trump seemed kind of tired, as if he knew his act had gotten stale but he couldn’t really figure out how to freshen it up. Ben Carson was his normal sleepy self, basically promising over and over that sometime very soon he’ll release the kraken and everyone will see that all his weird plans really will work. Marco Rubio tried to sound energetic, but mostly sounded kind of manic and evasive. Chris Christie did pretty well, though probably not enough to do himself much good. John Kasich was obviously frustrated with the clown show. I’m not sure that helped him tonight, but it might down the road when 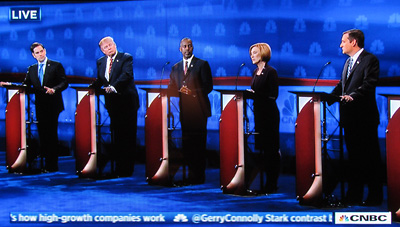 everyone else gets tired of it too. Carly Fiorina spoke forcefully, but said virtually nothing of substance. Ted Cruz didn’t say anything that I can remember. Rand Paul and Mike Huckabee were equally forgettable.

I think that Bush, Trump, and Cruz will lose support in the next few polls. Carson might do okay, since his sleepy persona seems inexplicably attractive to a lot of people. However, he might have problems if this Mannatech thing blows up on him. Rubio might pick up a point or two, though I wouldn’t put money on it. Fiorina? She might pick up a few points. She speaks well if you don’t pay too much attention to what she’s actually saying, and she plays the Hillary card well.

The truth is, I just don’t know. The whole thing seemed like a blur. These guys want to promise to cut taxes and slash regulations, and that’s about it. They all but refuse to take any other question seriously.

My condolences to all the real reporters who have to come up with a thousand words of colorably serious analysis tonight on deadline. But you’re all pros. I know you can do it.

7:19 – Huckabee doesn’t want to walk his grandchildren “through the charred remains of a country called America.” Okay.

7:17 – Trump sounds tired. Just repeating his themes from two months ago. Now he’s rattling on about his great success at getting the debate reduced from three hours to two. Yeesh.

7:15 – Oh wait. Carson just wants to thank everyone. Plus: Political correctness is bad.

7:14 – Closing statements: Basically, they’re all riffs on who hates government the most.

7:11 – Fiorina thinks the answer for Social Security and Medicare is…zero-based budgeting! Christ. People of a certain age are all banging their heads on the table right now.

7:07 – I think these candidates need shock collars or something.

7:04 – Once again, Huckabee says the answer to our problems is to cure all diseases. I guess no one’s thought of that before.

7:03 – Closing statements are coming up. So I guess Trump and Carson won half the argument over that.

6:58 – The attacks on the moderators are really flying tonight.

6:55 – Bush wants to regulate fantasy football betting. But he doesn’t want the federal government to do it. Then who?

6:54 – Kasich: Ohio State made $500 million by selling a parking lot. That’s a campaign selling point? They probably had to do it because Kasich cut their budget.

6:52 – Trump lied about criticizing Mark Zuckerberg. Carson lied about Mannatech. Fiorina lied about the size of the tax code. Rubio flatly refused to answer a question (“discredited attacks from Democrats”) that I guess he didn’t think he could just lie about. This is quite a debate.

6:46 – Trump says he’s going to change the no-guns policy at his resorts. I can’t wait to see that.

6:34 – Q for Bush: Why does he want to tax labor at a higher rate than capital? Bush argle bargles for a while, but never addresses the question. Bush is really making zero impression tonight.

6:32 – Huckabee is first to compare the federal government to today’s blimp fiasco. How is it that it took more than an hour for someone to do this?

6:31 – Carson says he no longer supports ethanol subsidies. He just wants to kill all subsidies.

6:27 – Trump says he never criticized Zuckerberg. Here’s the report from CNN: “‘Mark Zuckerberg’s personal Senator, Marco Rubio, has a bill to triple H-1Bs that would decimate women and minorities,’ Trump wrote in his immigration plan.”

Trump says he never said this. Just more misreporting from the lamestream media. You can probably guess what’s coming next. Here it is from Trump’s own immigration white paper.

6:21 – Here’s Jim Geraghty at NRO: “In March of last year, Dr. Ben Carson…appeared in a video for Mannatech, Inc., a Texas-based medical supplement maker. Smiling into the camera, he extolled the benefits of the company’s ‘glyconutrient” products.'” Apparently this goes back to 2004.

6:18 – Carson says he had nothing to do with some shady company called Mannatech. Anyone care to fact-check this?

6:15 – Fiorina is really annoying. Hell, they’re all annoying. But Fiorina doesn’t even pretend to offer up policy answers. She just gives mini stump speeches about how bad everything is.

6:13 – Kasich on the Boehner budget: “No more of these silly deals” if he’s elected president. But Kasich made plenty of deals just like this when he was chairman of the House Budget Committee.

6:10 – I actually think this is a weakness for Rubio. He seems too young, too close to just paying off student debt, too irresponsible with money. Nice young man, but president? Maybe he needs to get a gray hair or two.

6:08 – Becky Quick is really going after Rubio. So Rubio declares he’s just not going to answer.

6:07 – Fiorina says companies are consolidating because it’s the only way to compete with big, corrupt government. “This is how socialism starts.” Is that also why she bought Compaq when she was CEO of Hewlett-Packard?

6:01 – Carson: Some people go overboard in pursuit of profit. Socialist! Ahem. Anyway, we need to cut regulations. Apparently this will make everyone a little more socially responsible?

6:00 – Trump: Hell, everyone in Atlantic City has declared bankruptcy. “Nobody can solve debt problems like me.” Does this mean Trump intends to put America in Chapter 11?

5:55 – Jeebus. This discussion of Social Security is just bonkers. I don’t think I can summarize it in justice.

5:52 – Christie: Tell people the truth: The government has stolen their money. They’re not getting it back. Or something.

5:47 – Cruz uses all his time to attack the media, then complains loudly when he’s cut off. “You don’t want to hear the answer?” “You’re not interested in the answer?” I guess we know what his fundraising pitch is going be tomorrow morning: The mainstream media is afraid to let me talk!

5:45 – Fiorina: What if a CEO was held criminally liable for lying? OMG. Carly would have a life sentence in the Supermax up the road, that’s what.

5:39 – Moderators are really having a hard time keeping these folks in line. It’s kind of like a mirror press scrum: Every time a candidate stops talking, all the others start shouting for attention.

5:38 – Impressive! Rubio turns a question about missing Senate votes into an attack on the mainstream media.

5:34 – Fiorina says the tax code is 73,000 pages long. She’s going to cut that to three pages. There’s so much ridiculousness here that it’s hard to know where to start.

5:32 – The CNBC folks have been pretty good at getting everyone to fight with each other.

5:27 – Carson says his flat tax will be around 15 percent. And by God, if he ever shows you the details, you’ll see how awesome and deficit-killing it is.

5:20 – Rubio: “I share a sense of optimism about America’s future.” What? Even by the standards of absurd answers to “what’s your greatest weakness,” this makes no sense.

5:18 – Ah, no opening statements. I guess Trump and Carson lost out on this one.

5:05 – “Policy hasn’t really impacted anyone’s poll numbers in this debate so far.” This might end up being the most salient quote of the whole evening.