Medicaid funding is shared by the states and the federal government. Between 2000 and 2013—the most recent year reported by the CMS actuaries—the share of Medicaid spending shouldered by the states increased by an average of 6.1 percent per year. This is not total spending. It’s just the portion the states themselves paid for. 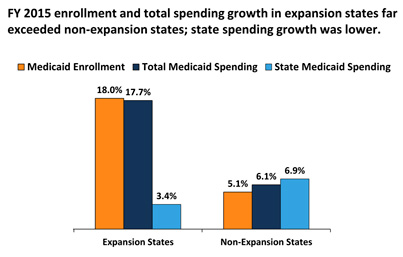 Obamacare may have increased total Medicaid enrollment and spending, but the feds picked up most of the tab. At the state level, it actually reined in the rate of growth.

In other words, the states that have refused the expansion are cutting off their noses to spite their faces. They’re actually willing to shell out money just to demonstrate their implacable hatred of Obamacare. How much money? Well, the expansion-refusing states spent $61 billion of their own money on Medicaid in 2014. If that had grown at 3.4 percent instead of 6.9 percent, they would have saved about $2 billion this year.

Here’s what this means: the states that refuse to expand Medicaid are denying health care to the needy and paying about $2 billion for the privilege. Try to comprehend the kind of people who do this.

POSTSCRIPT: Actually, there’s more. The residents of every state pay taxes to fund Obamacare, whether they like it or not. Residents of the states that refuse to expand Medicaid are paying about $50 billion in Obamacare taxes each year, and about $20 billion of that is for Medicaid expansion. Instead of flowing back into their states, this money is going straight to Washington DC, never to be seen again.

So they’re willing to let $20 billion go down a black hole and pay $2 billion extra in order to prevent Obamacare from helping the needy. It’s hard to fathom, isn’t it?