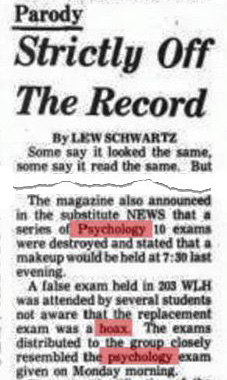 More Ben Carson news today! You remember Doc Carson’s story about the psychology test hoax that proved he was the most honest man at Yale? Well, Carson says it really happened, and the proof is on the right. It’s a piece from the Yale Daily News about a parody issue of the News published by the Yale Record. Apparently the parody issue announced that some psychology exams had been destroyed and a retest would be held in the evening. Hilarious!

And yet—it certainly seems likely that this is where Carson got the idea for his story. He remembered the hoax, and then embellished it considerably to turn it into a testimony to the power of God. This even makes sense. It seemed like a strange story for Carson to invent, and it turns out he didn’t. He took a story he recalled from his Yale days and then added a bunch of bells and whistles to make it into a proper testimonial.

I have a feeling that posting this news clip won’t do Carson any favors. Before, he could just insist that it happened and call the media a bunch of liars. Now, he has to defend the obvious differences between the actual hoax and what he wrote in his book. That’s not likely to turn out well. His supporters will believe him utterly (just take a look at the comments to his Facebook post), but no one else will.

Then again, maybe all this stuff did happen. Maybe the hoaxsters got the professor to cooperate. Maybe 150 students showed up, not just “several.” Maybe a fake photographer really took his picture. Maybe the professor gave him ten dollars. The kids who printed the parody issue are probably all still alive and should be able to clear this up. Let’s go ask them.