I have never understood why civil asset forfeiture doesn’t inspire more outrage. For liberals it’s a plain-and-simple civil liberties issue. For conservatives, it’s an out-of-control big government issue. There should be almost unanimous agreement that it’s a horrific, unconstitutional practice that should be halted immediately. If police suspect that money or property has been used in the commission of a crime, they should be the ones that have to go to court to prove it. They should not be allowed to simply seize the assets and then force the victim into a Byzantine and expensive maze to get them back.

This seems self-evident. And yet, nothing other than small tweaks to the system ever get done. It’s considered tough on crime, I guess, and that makes conservatives love it and liberals afraid of it. Or something.

But guess what? A few years ago the practice started getting more publicity—books, videos, training sessions, etc.—and it took off. And why not? Budgets were tight, and police departments are allowed to keep a portion of all the money they seize. How fast did it grow? A rough guide to the value of civil asset forfeitures is the net assets in the Assets Forfeiture Fund maintained by the Department of Justice. After 20 years of relatively slow growth, it suddenly exploded, going from under $1 billion in 2006 to $4.5 billion in 2014. This chart comes from “Policing for Profit,” recently released by the Institute of Justice: 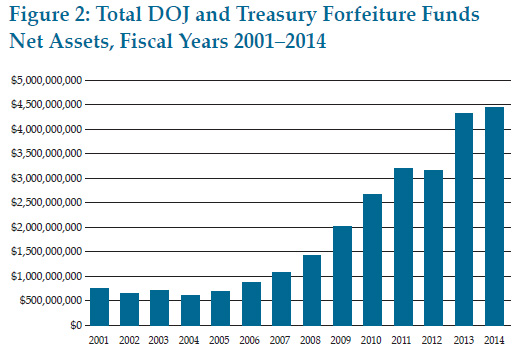 This is by no means a total measure of civil asset forfeitures. As the report notes, “deriving similar totals at the state level is impossible because most states require little to no public reporting of forfeiture activity.” But a pretty good guess is that it amounts to $300-400 million every year.

It’s a disgrace. At the very least, victims should have the right to a quick, cheap adjudication in which the police would have to present compelling evidence in order to keep the assets they’ve seized. But really, there’s no reform that can possibly make it right. I’ve heard all the defenses of the practice, and they don’t change the picture by much more than a hair. This is something that should be stopped, period.