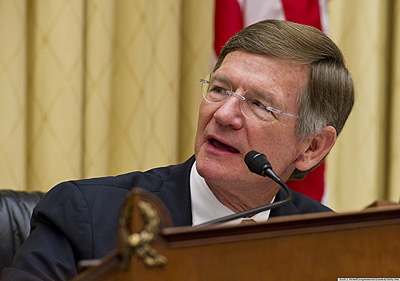 The Washington Post writes today about a long-running feud between die-hard climate-denier Lamar Smith and pretty much anyone who says that climate change is real:

The flash point in the feud between House Science Committee Chairman Lamar Smith (R-Tex.) and the National Oceanic and Atmospheric Administration is a congressional subpoena. The congressman, a prominent global warming skeptic, is demanding that the government turn over its scientists’ internal exchanges and communications with NOAA’s top political appointees.

Smith believes this information, showing the researchers deliberative process, will prove that they altered data to fit President Obama’s climate agenda when they refuted claims in a peer-reviewed study in the journal Science that global warming had “paused” or slowed over the last decade.

“These are government employees who changed data to show more climate change,” the chairman said in a statement to The Washington Post. “Americans deserve to understand why this decision was made. Despite what some critics claim, the subpoena is not only about scientists. Political operatives and other NOAA employees likely played a large role in approving NOAA’s decision to adjust data that allegedly refutes the hiatus in warming.”

Over the last few years, harassment of climate scientists via subpoenas and FOIA requests for every email they’ve ever written has become the go-to tactic of climate skeptics and deniers. The purpose is twofold. First, it intimidates scientists from performing climate research. Who needs the grief? Second, it provides a chance to find something juicy and potentially embarrassing in the trove of emails.

In the case of Lamar Smith vs. NOAA, the key fact is this: Smith has no reason to think the scientists in question have done anything wrong. None. He doesn’t even pretend otherwise. He has simply asserted that it’s “likely” that politics played a role in “adjusting” the climate data. But at no time has he presented any evidence at all to back this up.

This is a pretty plain abuse of congressional subpoena power, and so far NOAA is refusing to comply. In the case of private critics using FOIA, it’s a pretty clear abuse of FOIA—and one of the reasons that I have some reservations about FOIA that might seem odd coming from a journalist. It’s one thing to demand private communications when there’s some question of wrongdoing. It’s quite another when it’s just a fishing expedition undertaken in the hope of finding something titillating.

In any case, Smith is a disgrace, and it’s a disgrace that Republicans allow him to chair a committee on science. Smith’s view of science is simple: if it backs up his beliefs, it’s fine. If it doesn’t, it’s obviously fraudulent. This is the attitude that leads to defunding of climate research or banning research on guns. After all, there’s always the possibility that the results will be inconvenient, and in the world of Smith and his acolytes, that can’t be allowed to stand. Full speed ahead and science be damned.