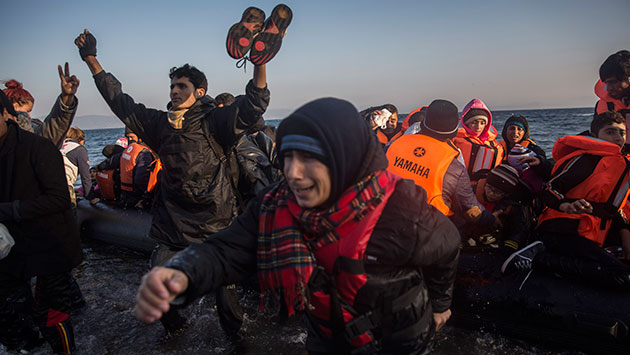 Chris Cillizza on the post-Paris push among Republicans to keep Syrian refugees out of the country:

Over the past 24 hours, almost half of the nation’s governors — all but one of them Republicans — have said they plan to refuse to allow Syrian immigrants into their states in the wake of the Paris attacks carried out by the Islamic State….That stance has been greeted with widespread ridicule and disgust by Democrats who insist that keeping people out of the U.S. is anathema to the founding principles of the country.

….Think what you will, but one thing is clear: The political upside for Republican politicians pushing an immigration ban on Syrians and/or Muslims as a broader response to the threat posed by the Islamic State sure looks like a political winner.

Cillizza has some poll numbers to back this up, but he’s right in more ways than just that. Here’s the thing: to the average person, it seems perfectly reasonable to be suspicious of admitting Syrian refugees to the country. We know that ISIS would like to attack the US. We know that ISIS probably has the wherewithal to infiltrate a few of its people into the flood of refugees. And most voters have no idea how easy it is to get past US screening. They probably figure it’s pretty easy.

So to them it doesn’t seem xenophobic or crazy to call for an end to accepting Syrian refugees. It seems like simple common sense. After all, things changed after Paris.

Mocking Republicans over this—as liberals spent much of yesterday doing on my Twitter stream—seems absurdly out of touch to a lot of people. Not just wingnut tea partiers, either, but plenty of ordinary centrists too. It makes them wonder if Democrats seriously see no problem here. Do they care at all about national security? Are they really that detached from reality?

The liberal response to this should be far more measured. We should support tight screening. Never mind that screening is already pretty tight. We should highlight the fact that we’re accepting a pretty modest number of refugees. In general, we should act like this is a legitimate thing to be concerned about and then work from there.

Mocking it is the worst thing we could do. It validates all the worst stereotypes about liberals that we put political correctness ahead of national security. It doesn’t matter if that’s right or wrong. Ordinary people see the refugees as a common sense thing to be concerned about. We shouldn’t respond by essentially calling them idiots. That way lies electoral disaster.