The Pentagon has completed its investigation of the US attack on a hospital in Afghanistan operated by Doctors Without Borders, and it paints a grim picture. Gen. John Campbell, the top commander 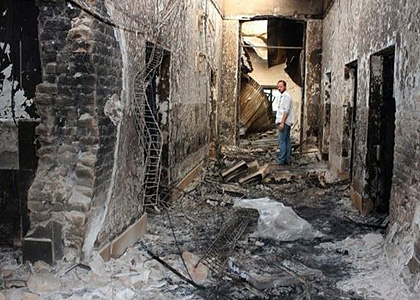 in Afghanistan, delivered a summary of the investigation today:

According to the military’s investigation, the special operations gunship had sought to attack a building suspected of being used as a base by Taliban insurgents, but the plane’s onboard targeting system identified the coordinates as an open field. The crew decided to open fire on a nearby large building, not knowing that it was the Doctors Without Borders hospital.

….When the gunship flew closer, its targeting system “correctly aligned” with the intelligence building, not the hospital, but the crew ignored the system, he said. The AC-130 aircraft had launched more than an hour early “without conducting a normal mission brief” or receiving a list of locations that it was barred from attacking, including the hospital, he said.

….A minute before the gunship started firing, the crew transmitted the coordinates of their target to their headquarters at Bagram Airfield, north of Kabul, giving the accurate location of the hospital, Campbell said. The headquarters “did not realize that the grid coordinates for the target matched a location on the no-strike list,” he said.

In summary: the gunship crew left without getting briefed. Their targeting system malfunctioned, so they decided to open fire on the nearest large building instead. When the targeting system later found the right building, the crew ignored it. And when they sent coordinates to headquarters, nobody there matched it up with their no-strike list.