I don’t suppose I really have a lot to say about this, but perhaps we can file it under the widespread belief that “America is going to hell but things are OK in my neck of the woods.” 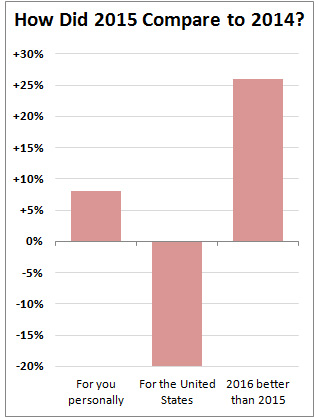 This dynamic—I’m doing OK but the rest of the country is going to hell—is so widespread that it’s hard not to blame the media for it. Is that fair? Or is it just something about human nature? In either case, it’s kind of crazy. Not only was 2015 as good or better than 2014 for a huge majority, but optimism was high too: an even bigger majority thought 2016 would be better yet. But for America as a whole, far more people thought 2015 was worse than thought it was better. It’s hard for me to think of any important metric by which 2015 was worse than 2014, but apparently mass shootings and terrorist attacks weighed heavily on everyone. Those were, by far, the news stories that everyone rated the most important.