Maybe Paul Ryan really is getting a handle on this whole governing thing:

Congressional negotiators have agreed to a $305 billion measure to fund highways and mass-transit projects for five years, the longest in almost two decades—and an unexpected show of agreement after years of clamoring by state transportation officials for money for infrastructure projects.

….The agreement was made possible when lawmakers identified a collection of strategies to offset the costs. Among other things, the measure would raise revenue by selling oil from the nation’s emergency stockpile and taking 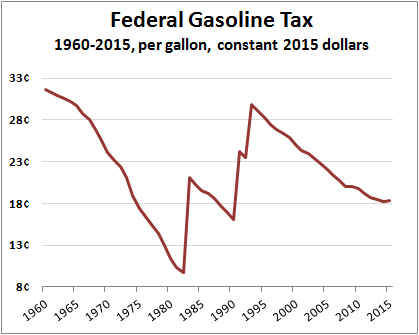 money from a Federal Reserve surplus account that works as a sort of cushion to help the bank pay for potential losses.

The “strategies” here are necessary because the gas tax has declined over the past two decades, and unlike in past eras, inflationary erosion is no longer being offset by a rapid increase in miles driven. As a result, the highway trust fund doesn’t have enough money to pay for all the stuff Congress wants to do. This is being fixed by funding highways partly by gas taxes and partly by other revenue sources, which destroys the principle that “people who use federal transportation systems should pay for the projects.”

Of course, this is a dumb principle anyway. Lots of people benefit from transportation infrastructure who don’t pay gas taxes. We should just ditch this principle for good and instead fund the government like this:

See? Easy peasy. We still have the problem of matching revenue and spending, of course, but at least we get rid of all the nonsense about funding specific programs from specific sources and worrying about trust funds “going broke.” Nothing is going broke. We’re just raising money and spending money. If we’re worried about a balanced budget, then we have to raise taxes or reduce spending, and it doesn’t really matter which taxes or which spending we target. It’s all just money.

So I’m perfectly happy that Congress is ignoring the “principle” of funding transportation projects only via gas tax money. On the other hand, the revenue sources they’re tapping in order to pass this bill are probably pretty ill considered. Both are in the nature of emergency funds, and both are one-time deals that can’t be repeated. But in a world in which taxes not only can’t be raised, but can’t even be kept the same, I guess there’s little choice.