I am, of course, familiar with the hipster love of music on vinyl. But I didn’t know that cassette tapes were making a comeback too:

Many people over 30 remember cassettes, with nostalgia, if not some disdain….Go to any indie show and inevitably, among the T-shirts and knickknacks, there will be tapes. Some record labels are now cassette-only. The National Audio Co., America’s largest manufacturer of audiocassettes, reported that 2014 was its best year yet.

But before the revisionists completely rewrite my adolescence, let’s be clear about something: As a format for recorded sound, the cassette tape is a terrible piece of technology….Each time you play 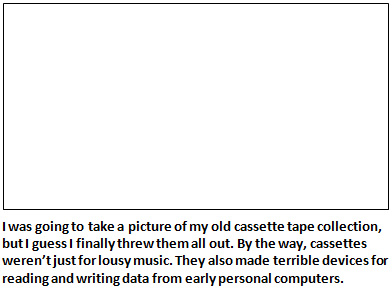 one it degrades. Bad sound gets worse. Casings crack in winter, melt in summer.

Craziness. The only reason anyone liked cassettes back in the day was because they were better than 8-track tapes. When I was in college, you could hardly turn a corner without hearing an earnest conversation about Maxell vs. TDK,1 Dolby vs. Dolby C, chrome vs. metal, 60 minutes vs. 90 minutes.2 But those conversations only existed because everyone also understood that cassette tapes fundamentally sucked. There was lots of innovation, but it was all just part of a desperate attempt to improve the sound of a format that was inherently lousy because the tape was just too damn narrow. There’s a limit to what you can do when you cram four audio tracks onto eighth-inch analog tape.

But lots of people today have forgotten about all that, I guess. Oh well. I’m pretty convinced that about 90 percent of the population couldn’t tell the difference between music played on half-inch reference tape and music played on a Teddy Ruxpin doll.3 So I suppose it doesn’t matter.

Still, cassettes? Seriously folks: a thumb drive is better in every conceivable way. Don’t get sucked in.

1I was a Maxell guy. I have no idea why.

2No one who wanted to be taken seriously ever considered 120-minute cassettes. And for good reason: they were just too fragile.

3This quite likely includes me.