Politico has a fascinating story today. It’s all about Mitch McConnell’s months of LBJ-worthy maneuvering to get legislation passed that would repeal Obamacare and defund Planned Parenthood, thus paving the way for a clean budget bill later this year. But here’s the kicker: he wasn’t engaged in Herculean negotiations with Democrats. He was engaged in Herculean negotiations with his own party. The goal was to somehow trick them into supporting the Obamacare/PP bill, which was entirely symbolic since President Obama would veto it instantly, 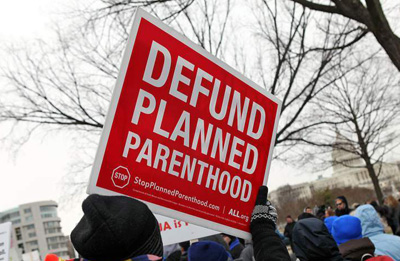 paving the way for a budget bill later this month that Obama could sign.

How did he do it?

McConnell marshaled a secret weapon that ultimately would work in his favor: Anti-abortion groups.

Since the summer, the Senate majority leader had spoken with influential organizations opposing abortion such as National Right to Life and the Susan B. Anthony List to ensure they would back his move to link the Obamacare repeal with a measure to defund Planned Parenthood….Anti-abortion groups vowed to score against any senator who rejected the anti-Planned Parenthood provision, exerting additional pressure on conservative lawmakers who would have seen their sterling pro-life ratings tarnished if the defunding language was dropped.

Apparently McConnell persuaded the anti-abortion folks that their cause was better served by electing a Republican president in 2016, and the best way to do that was to avoid a protracted government shutdown over a budget bill that Democrats would fight if it included the PP defunding language. Instead, he proposed a symbolic standalone bill that allows everyone to vote against Obamacare and Planned Parenthood. Obama will veto it; everyone will shrug and say “we tried”; and then a clean budget bill will be negotiated and signed.

This is a strategy that firebrand conservatives opposed, but apparently they aren’t willing to risk their 100 percent scores from anti-abortion groups. So they caved.

And that’s that. In today’s Washington, passing bills isn’t a matter of getting Republicans and Democrats to agree. They can usually manage that. The trick is somehow neutering the wingnut faction of the Republican Party. Once that’s done, negotiations between the two parties are (relatively speaking) a piece of cake. Welcome to 2015.