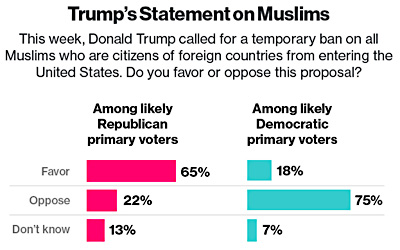 Why is Donald Trump not paying a price for his increasingly unhinged rhetoric? Two recent polls tell the story.

At the top is a Bloomberg poll that asks if you agree with Trump’s call for a ban on Muslims entering the country. Less than a quarter of Republicans oppose it. At the bottom is an MSNBC poll that asks what kind of person Trump is. Only a quarter of Republicans think he’s insulting and offensive. These aren’t polls of tea partiers. They aren’t polls just of conservative states. These are polls of all Republicans in the nation. By a very wide margin, ordinary Republican voters think the stuff Trump is saying sounds great. Only about a quarter don’t like what they’re hearing.

I don’t really know what to say about this. On 9/11, nineteen Muslim terrorists killed 3,000 Americans and destroyed two skyscrapers. There was an enormous thirst for revenge, and eventually George Bush used this to send us to war in Iraq. But even at the height of the fear, there was never any call to ban Muslim immigration.

This year, 14 people are killed by a couple of deranged Muslims with no real ties to international terrorism, and two-thirds of Republicans are in favor of banning all Muslims from the country. So what’s happened over the past decade? Multiple things, I suppose. This is an election year, and 2001 wasn’t. In addition to the San Bernardino shooting, there have been several overseas attacks and a huge tide of refugees coming from Syria. Republican voters have been driven crazy by Barack Obama, who they’ve been told repeatedly is all but a Muslim mole. Finally, in 2001 a Republican president spoke pretty firmly against anti-Muslim bigotry. No one on the Republican side is doing that now.

And of course, there’s Donald Trump. Is he cause or effect? A bit of both, I think. In any case, it’s increasingly clear why Trump isn’t paying a price for what he says: It’s because most Republicans like it.

UPDATE: I’m not trying to drive you all into despair for the country. Honest, I’m not. But here’s another one: